“Wait’ll you see my Gidget. You’ll want her for your valentine.”

“Gidget” is a person, a novel, a film, a film franchise, a song, a television show and a cultural phenomenon. In 1957, Frederick Kohner, an Austrian-born Jew working as a screenwriter, wrote a novel based on the beach adventures of his under-sized, surf-obsessed daughter, Kathy. The nickname the boys at the beach gave her served as the title: “Gidget”. Half-girl, half midget. The tale depicted in the novel and subsequent film is basically true: Kathy was a petite, young girl who, at an impressionable time in her life, fell in love with the beach and surfing. An outgoing tomboy, she attached herself to a group of surfer boys at Malibu at a time when surfing was still an obsessive pursuit enjoyed by few. A niche next to the Malibu Pier housed a small, dedicated colony of young surfers, many of whom went on to become legendary in the sport and/or the industry.

The novel was an instant success. So much so that it largely contributed to a boom in surfing that began in the late 1950’s. Soon, many hardcore surfers were lamenting the increase in crowds at surf spots up and down the West Coast. Kohner eventually wrote five sequels to his first novel although they were not successful. The little known fact that they were written at all is no more than an eyebrow-raising bit of trivia. He also novelized the two subsequent film sequels and these have become collectible items of the genre.

The film Gidget, released by Columbia in 1959, is landmark in a way that few films can be landmark. It was truly a first: Hollywood’s first surf movie. Putting “Hollywood” and “surfing” together is anathema to any true, self-respecting surfer. Real surfers bemoan the release of Gidget, and blame it for exploiting their wave-riding lifestyle and causing a glut of “hodads” and “gremmies” (wannabes) on any and all beaches where there were breaking waves. The Beach Boys and American International’s “beach party” movies soon followed. Gidget and a true phenomenon was born. Surfers have long been hostile to an industry that depicts them as Spicoli-types: stoned vagrants who contribute zero but instead leech off society. They point to films like Fast Times at Ridgemont High and Point Break as failures in Hollywood’s attempt  to portray the surfing lifestyle. But this is no fault of Gidget‘s. The 1959 film is truly engaging. It made stars of Sandra Dee and James Darren, boasted a cast of notables such as Cliff Robertson in the iconic role of Kahuna, Arthur O’Connell, Yvonne Craig, Joby Baker and Tom Laughlin. More than just a surfing movie, it is a delightful slice of life circa 1959. Suburban homes, front yards, living rooms, Saturday nights. A lovely time capsule. The beach scenes are also great images of the summertime living of the era. The requisite burger stand sits atop the hill. Beach goers descend and come upon the surfer’s enclave: Stinky’s surfboard ‘shaping bay’ sits next to the Kahuna’s shack. Inside is all you’d ever need: exotic pictures on the wall, cot, chair and hot plate with coffee pot. Outside, the boys loiter, waiting for surf. Reclining in a hammock, playing chess, plinking on a ukulele or beating a drum. With these indelible images, you could watch with the sound down and still be enthralled. 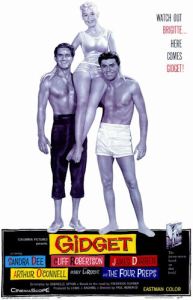 The “Malibu” scenes were actually shot 20 miles up the highway at Leo Carillo State Beach (which is a wonderful aside for us classic movie fans. Leo Carillo was a wonderful Spanish actor in many old films. In later life, his work as a preservationist was honoured with this beach and state park being named after him. Fitting, too, that many films were shot here, including the aforementioned Point Break). The sequels, as most sequels do, decline in quality. Gidget Goes Hawaiian, however, is another delightful film with many things to recommend it. Sandra Dee is absent and in her place is Deborah Walley, on whom the jury is still out. She is sprightly, bubbly and good at handling this material but at the same time she can be hammy and irritating. Watching with hindsight though you can keep in mind her performances in Beach Blanket Bingo and Spinout. James Darren returns as Moondoggie as does Joby Baker albeit as a different character. This excellent cast is rounded out by pretty Vicki Trickett, Michael Callan, Carl Reiner as Gidget’s dad and the actress JEFF Donnell (Jeff?) as the mom. The script is pleasant and deals with the damage loose talk can do to a girl’s reputation. Not much to say about Gidget Goes to Rome. James Darren is, as always, reliable as he completes the trilogy as Moondoggie. The bland Cindy Carol becomes Gidget #3. Interesting note: Don Porter appears as Gidget’s father. He would return to the role on the small screen. Caesare Danova (Viva Las Vegas) and Danielle De Metz provide the Roman eye candy. Not much surf in Rome, though, so this film is OK but maybe not as a vehicle for the beach bunny Gidget.

Music from movies doesn’t have to be good. I can enjoy it simply because it puts me in mind of the films I love. It so happens, though, that the songs spawned by the films are pretty good. The first film featured an appearance and two songs from the Four Preps, a collegiate-type vocal group that featured Glen A. Larson who would become a heavyweight TV producer in the ’80’s (Magnum, P.I., Knight Rider). They sang the delightful title track over the opening credits. James Darren also had a crack at it in the beach shack. The Four Preps added “Cinderella” and Darren the excellent “The Next Best Thing to Love”. Gidget Goes Hawaiian was a snappy song done well by Darren and in an instrumental version by Duane Eddy.

The small screen featured several incarnations of Gidget, however none of the actresses chosen to play the role are notable in any way; except the fact that they once played Gidget. Television’s first Gidget, however, was played by fresh-faced, 18-year-old Sally Field. The series is delightful and features many changes from the films. The series begins where the first film left off: Moondoggie is heading back to Princeton and Gidget is sweating the thought of their separation. The differences between series and films are many. First off, Moondoggie (played blandly by Stephen Mines) does not feature in the events of the series. Also, suddenly Gidget’s mom has died and Professor Lawrence is raising Gidget on his own. Gidget’s sister and her husband are always throwing in their two cents where Gidget’s rearing is concerned. Gidget’s best friend, Larue, plays Ethel to Gidget’s Lucy. It’s interesting to watch the show and see that a lot of it revolves around how father and daughter relate to each. Their relationship is clearly defined and it’s charming to see how they love each other and form a partnership and navigate adolescence. I have to think that this abbreviated family was a rare depiction on television of the day. The most significant thing about the series is this: here we have a character who is synonymous with a beach lifestyle and the freedom that comes with summer but we’re seeing her IN SCHOOL. The Gidget series serves as a bridge between the frivolity of the “beach party” movies and real life: school, homework, week nights. With the series we get that great post-Labour Day salve. We’re all back to school and so is Gidget. Bottom line: Sally Field is effervescent and delightful to watch. The show did poorly in its first season but began to pick up and showed a big following with summer reruns. The network, however, had already cancelled it and that was that. 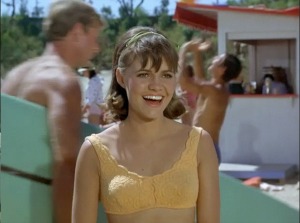 Gidget as ‘phenomenon’ has been with us for almost 60 years. It’s cool, by the way, that the word ‘gidget’ was simply invented by a bunch of regular joes hanging out at the beach. “Gidget” has come to refer to any light, bouncy and young beach girl. It’s used as the name of a cute camper trailer and some girl rocker. Gidget is also a feminist icon. Women might disagree owing to her perceived airheadedness. But Gidget was a vivacious young woman who took life by the horns, had a positive attitude and was sure there was nothing she couldn’t do. She had unapologetic fun and endeavoured to help those around her. Not to mention the obvious fact that she was a proponent of athleticism and an outdoor lifestyle. Coolest of all though is that it’s a homegrown phenomenon. Kathy Kohner Zuckerman was a real girl, nicknamed by friends, immortalized in her father’s book. Novels, films, television, cultural phenomenon, feminist icon, cutie. Quite a girl.