The Conch Republic: A Tropical Fable 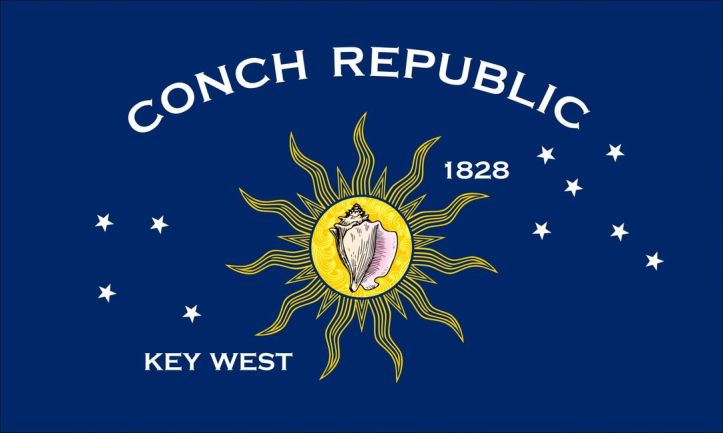 What’s your favourite micronation? Is it the Aerican Empire, a Canadian-based sovereignty that claims a disconnected territory including land in Australia and Montreal (a “house-sized” parcel), colonies on Mars and Pluto as well as on another imaginary planet? Or is it Celestia, founded by one man in 1949 and who’s land encompassed the entirety of outer space? James Mangan hoped to keep any one country from claiming sovereignty in space and so sought to claim it for all mankind. He actually had Celestia’s flag raised at the United Nations and minted coins including the gold “Celeston”. Or maybe you’re partial to Kugelmugel, which is a ball-shaped house? In 1976, when Austrian artist Edwin Lipburger caught grief over building permits for his oddly-shaped structure, he promptly declared it a sovereign state. Today the Republic still holds a population of 650 non-residents.

OK, I’m kind of kidding; no one really has a favourite micronation and besides the only one that really matters is the one we’re talking about today. 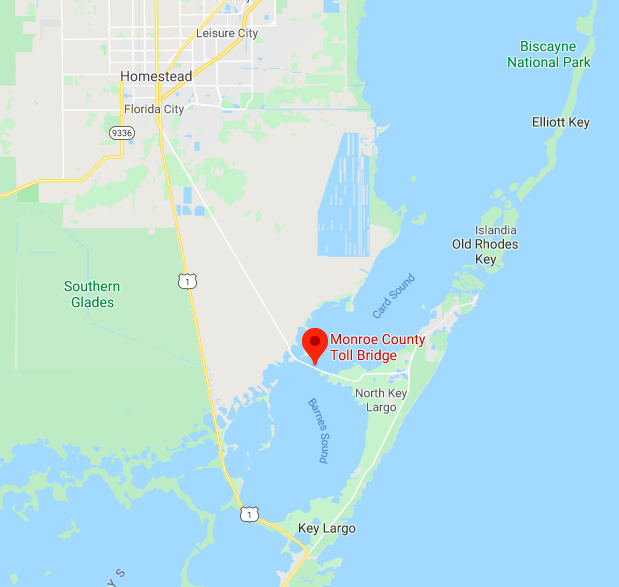 In 1982, the United States Border Patrol set up a roadblock just south of Florida City, Florida. At this geographical point, US Route 1 becomes the South Dixie Highway and shooting off south-east from this juncture is Card Sound Road. These two roads are the only thoroughfares that link mainland Florida with the Florida Keys; the South Dixie Highway lands on the Keys just south of Key Largo and Card Sound Road will take you to Card Sound Bridge. This bridge is a “high-rise toll causeway” – manned electronically – that spans Card Sound (natch) and will take you to North Key Largo.

The Border Patrol set up shop at this juncture in an attempt to stem the flow of narcotics and illegal immigrants. But this presented a problem for the law-abiding populace of the Keys. Key West city councillors and local business owners were raising concerns about the detriment this roadblock was to tourist traffic. When Washington refused to even engage in correspondence with Key West Mayor Dennis Wardlow, he took an unprecedented step; on April 23rd, 1982, he declared Key West’s independence and the city seceded from the union (“We seceded where others failed!”). After all, the US federal government had set up an armed border, effectively treating the Keys as a foreign country and cutting them off from the rest of the US so Wardlow declared the existence of a separate nation. The Conch Republic was born. 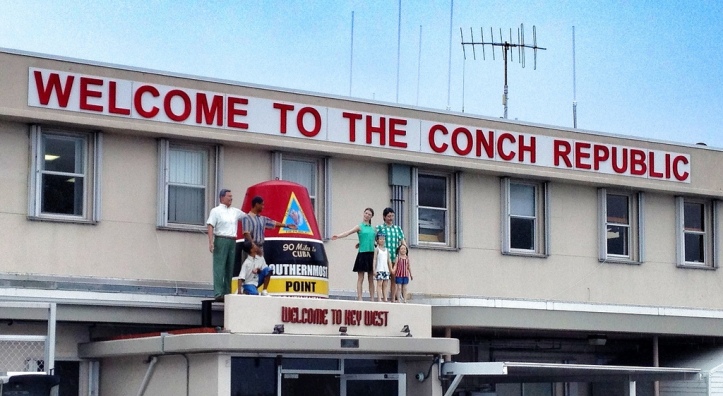 Wardlow’s inventive chutzpah was just getting started. Symbolism abounded during an early ceremony in the Conch Republic’s history. Wardlow was declared Prime Minister of the new land and his first order of business was to declare war. The weapons in his arsenal? A stale loaf of Cuban bread which was broken over the head of a volunteer dressed in a naval uniform. Was Wardlow crazy? Yeah, like a fox. Perhaps feeling guilt over his violent perversion of the time-honoured “breaking of bread” that is so symbolic of brotherhood, the Prime Minister promptly surrendered to the man in uniform and began the process of applying for foreign aid from the US government to the tune of one billion dollars.

Officials in Washington finally took notice of the situation their perhaps even unconstitutional roadblock had caused. The Border Patrol removed their presence which had been in front of the Last Chance Saloon south of Florida City at the junction of the two aforementioned highways and the Conch Republic was even invited to attend the Summit of the Americas. These series of summit meetings have since 1948 been attended by members of the Organization of American States, a group of countries in the northern hemisphere that initially banded together to stem the spread of communism. Additionally, all this newsworthy activity gave the new Republic a boat load of publicity which also helped to increase tourism in the area.

The Republic carried on, uneventfully enjoying the newfound tourist boom, until they were invaded. In September of 1995, the United States Army Reserve planned an exercise that would simulate the invading of a foreign land. The plan was for them to land on Key West and carry on as if they were indeed attempting a takeover of an enemy country. Problem was – if you can believe it – no one thought to notify the local inhabitants that this was an exercise. Quick-thinking Prime Minister Wardlow, seeing another chance for attention-grabbing headlines just fall into his lap, went into action. He mobilized the population of his nation and engaged the “enemy”, sending a schooner out to “attack” a Coast Guard cutter. Inventive weapons were once again deployed; water balloons, conch fritters and stale Cuban bread. The Coast Guard responded by turning hoses on the schooner, ending the skirmish. The Coast Guard – good Joes all; Arnold Palmer was in the Coast Guard – complained to the Department of Defense for not notifying the Conchs of the exercise and good-naturedly surrendered to the Conch Republic in a festive ceremony. The Coast Guard also issued a formal apology; “(We) in no way meant to challenge or impugn the sovereignty of the Conch Republic”.

A further adventure of the Conch Republic involved the Seven Mile Bridge. Interesting in its own right, this stretch of bridge was originally built by railroad magnate Henry Flagler in 1912 as part of his plan to span the Keys by rail. Damage and erosion caused the bridge to fall into disuse and lead to a new stretch of bridge being built. There’s a gap in the old bridge just south of Pigeon Key, yet another fascinating and historical part of the Florida Kets. Initially intended as a work camp for railroad labourers, the small island is home to no less than eight buildings that are on the National Register of Historic Places. Lets go there.

Anyways…in 2006, the Conch Republic sought to claim the abandoned stretch of the old bridge for the Conchs. This attempt was tied to a recent episode that saw Cuban refugees reach the old Seven Mile Bridge and request entry into the US. Their request was denied though when the government claimed that – due to the gap – the bridge wasn’t connected to land and therefore not part of the United States. “Not part of the US, you say?” Conch Republic lawyers went into action and sought to claim the bridge for the Republic. Florida Governor Jeb Bush quickly shut things down, though; “With all due respect to the Conch Republic, the bridge belongs to all the people of Florida, and we’re not currently in negotiations to sell it.” Sell it?! You said it wasn’t yours! The Conch Republic gained additional publicity if not the Seven Mile Bridge.

On a darker note, the Conch Republic made the news in the aftermath of the 9/11 attacks when it was discovered that one of the perpetrators of the attack attained a passport from the Conch Republic. These unofficial documents look real and are issued in keeping with the lighthearted nature of the micronation. A “key player” in the attacks applied for a Conch Republic passport and may have used it to enter the US. A spokesman for the Republic noted that he himself had used his passport to enter and exit several countries multiple times.

The Conch Republic has an active military comprised of Army, Navy and Air Force all of whom band together to re-enact the Great Sea Battle of 1982. The re-enactments and air shows are regular parts of the Annual Conch Republic Independence celebrations. The 10-day festival – “Declare Your FUN-dependence!” – is usually held in April but, for 2020, has been rescheduled for November due to the worldwide Covid-19 pandemic. The festival kicks off with a “Breakfast of Champions” where you can join members of the CR High Command at Two Friends Patio Restaurant (check out their live webcam). Later there’s the raising of the colours at Mallory Square and a kick-off party – featuring a conch-blowing contest – at the Schooner Wharf Bar and Galley. There’s tall ship sunset cruises, a beach clean-up, a beachcomber hat contest, a dog fest, a drunken spelling bee and many performances of “Conch Republic – The Musical”.

I think it’s clear that the Conch Republic is certainly the funnest micronation out there. Tropical locale, relaxed vibe, escapist philosophy. Sure beats space or some round house in Austria, says I. 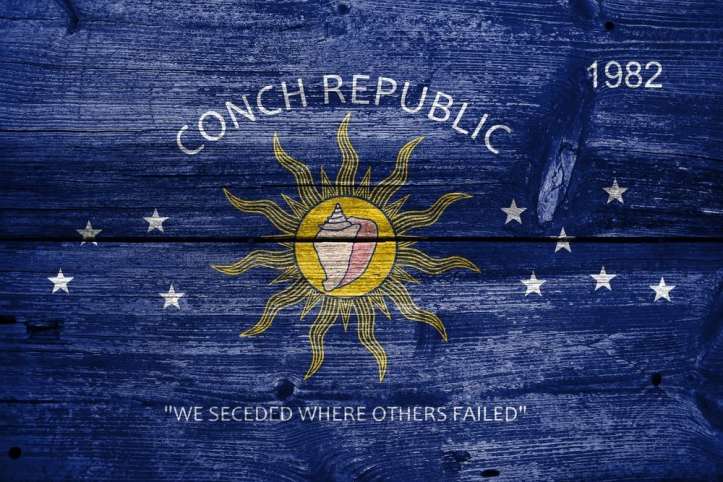