In my formative years as a pursuer of all things vintage, I took a book out from my high school library called That Old Time Rock & Roll by Richard Aquila. I may take it back someday.  The two most significant things I caught from Aquila’s book is that 1954 to 1963 is a distinct “oldies” era unto itself and the other was the idea that pop music from this time can be divided into three categories; R&B Rock, Country Rock and Pop Rock. Not always but often country rock would add elements of rhythm and blues resulting in a wonderful subgenre known as rockabilly.

Rockabilly – the term itself comes from combining rock and hillbilly – was born in the American South in the early 1950’s and directly lead to the emergence of mainstream, classic rock & roll. Rockabilly was an energetic music that sounded distinctly “country” while also containing elements of Western swing and jump blues. It was a raw, rustic music that often featured bold guitars and echoey vocals.

Jimmie Rodgers was the first true “country star” in the late 1920’s. Later, the legendary Bob Wills formed the Texas Playboys, a large outfit that created Western swing, country music that added horns and borrowed heavily from Louis Jordan’s brand of jump blues. A further version of this music was known as “boogie” or “hillbilly boogie” as heard in Tennessee Ernie Ford’s early records. This is turn lead to Memphis musicians playing an electric blues that white country boys were influenced by. One of these white country boys was Carl Perkins who played in a small combo up and down the honky tonk circuit around Memphis. In these broken down dives, jumped-up hillbilly music that the folks could dance to was essential to avoid outraged drunks heaving empty bottles at you. It is Perkins, just as much as any other performer, who could be considered the “father of rockabilly”. From there, a young truck driver from Memphis would take this sound – and Carl’s own tune, “Blue Suede Shoes” – to the masses.

Rockabilly spawned many stars, some popular for only a brief time. Other performers simply added a “rockability” to their style and therefore were able to remain relevant when rockabilly’s mainstream popularity waned. Let’s look at a few of these stars.

Carl Perkins — According to the late Charlie Daniels “Carl Perkins’ songs personified the rockabilly era, and Carl Perkins’ sound personifies the rockabilly sound more so than anybody involved in it, because he never changed.” Perhaps Carl would’ve enjoyed having a career that included more hits and more stardom but the fact that he didn’t makes him even more of a legend of rockabilly. It is what he is most known for. His enduring classic, “Blue Suede Shoes”, was covered by no less than Elvis Presley, who’s frenetic recording lacks the strutting style of Carl’s record. Perkins also had an admirer in the Beatles’ George Harrison, who at the height of Beatlemania, would register at hotels using the name “Carl Harrison”. Right at the moment when it looked like Carl might achieve real stardom, he and his band were involved in a serious auto accident. While he was recuperating, “Blue Suede Shoes” went to #1 on the country charts and #2 on the pop charts. Perkins’ career couldn’t regain traction, although he recorded many more rockabilly classics; “Honey Don’t”, “Everybody’s Trying to Be My Baby” and “Boppin’ the Blues”.

Johnny & Dorsey Burnette — Memphis boys the Burnettes grew up in the same housing project as Elvis Presley. They formed a rockabilly trio in the mid-’50’s and were signed to Coral Records. The trio broke up and the brothers went their separate ways. Johnny hit with “The Train Kept a-Rollin'” in 1956 but really had a good year in 1960. His “Dreamin'” went to #11 and his legendary recording of “You’re Sixteen” was a Top Ten hit in both the US and the UK. Johnny was killed in a boating accident in 1964. Brother Dorsey had less success after the brothers broke up their act but did place songs on the country charts through the 1970’s. He wrote and recorded “Hey, Little One”, recorded later by Glen Campbell.

Johnny Cash — The early recordings of this country music legend can certainly be considered rockabilly. A Sun Records artist like Perkins and Presley, Cash started his career with songs like “Folsom Prison Blues”, “Cry! Cry! Cry!” and “Hey, Porter” all performed in a shuffling, rockabilly style. While performing straight country music in the 1960’s, Carl Perkins was part of Johnny’s band.

Brenda Lee — Lee is a good example of a singer that started out singing rockabilly in a raw style before fine-tuning and stylizing her sound to appeal to a broader audience. Her cover of “Jambalaya” and her huge hit “Sweet Nothin’s” are examples of her rockabilly sound while the songs she is perhaps better-known for – “I’m Sorry”, “Break It to Me Gently” – are more in the pop style.

Eddie Cochran — Eddie perhaps made the best use of the sound that rockabilly may be most identified with; echo. Just listen to “Sittin’ in the Balcony”! The sharply dressed Cochran was a guitarist who was adventurous in the recording studio and experimented with many recording techniques. What he’s best known for, though, is writing and recording some great rockabilly records, records that were hits on the pop charts; “Twenty Flight Rock”, “Somethin’ Else” and the immortal “Summertime Blues”. He gained much fame by unfortunately being killed in an auto wreck when he was only 21. His legacy has lived on, though. John Lennon was impressed with Paul McCartney when they first met because Paul could play “Twenty Flight Rock” and modern-day rockabilly hero, Brian Setzer, is a huge fan of both Eddie and our next performer.

Gene Vincent — In the dictionary under “rockabilly” should be Gene’s “Be-Bop-a-Lula”. Gene’s echoing, hiccuping vocal make this song not only quintessentially rockabilly but one of the most beloved and popular songs of the golden age. Vincent was actually with Eddie Cochran when he was in the aforementioned accident. Vincent suffered broken ribs and collarbone but he was able to carry on and forge a cult following of sorts in Europe. Vincent, the very image of the rockabilly rebel, died in 1971.

Ricky Nelson — I’ve saved the best for last. Ricky Nelson remains one of the most popular and most significant artists of the 1950’s. He was at his core a rockabilly musician but his style was one that appealed to the masses in such a way that the general public did not even think of him necessarily as a rockabilly singer. The son of Ozzie and Harriet, Ricky got his start on his folks’ TV show and it was on this show that he began to be featured as a singer. In a way, you could say that what Elvis Presley did for rhythm & blues, Ricky Nelson did for rockabilly. Ricky’s wasn’t the feral brand of rockabilly being performed by others. His was a polished type, very clean and leaning to the pop side of rockabilly. (Incidentally, Ricky’s guitarist, James Burton, would transfer to Presley’s band in the late ’60’s and Burton is still today a featured player in Elvis World) His early country-flavoured pop/rock & roll/rockabilly tunes included “Be-Bop Baby”, “Stood Up”, “Waitin’ in School” and “Poor Little Fool”. Songs like “Lonesome Town” had rockabilly’s drama and echo and “It’s Late” and “Believe What You Say” are perfect examples of what rockabilly sounded like at its cleanest.

Ricky’s music style and his teen idol looks translated into much chart success; between 1957 and 1963, Ricky scored 2 Number One hits, placed 17 songs in the Top Ten and 31 in the Top 40. Historically, Ricky scores major points by trying to break away from the “teen idol” mold and attempting to chart his own course as a pioneer of country rock. As “Rick” Nelson, he would be rewarded with a hit song in 1972 when “Garden Party” – “if memories were all I sang, I’d rather drive a truck” – hit #6. Nelson joined the sad fraternity of musicians who died as a result of plane crashes when his private aircraft went down on the last day of 1985.

Many other popular performers have been identified with rockabilly and added their voices to its twangy echo; Elvis Presley, Roy Orbison, Buddy Holly, Charlie Rich, Sanford Clark, Roy Head, Duane Eddy, the Everly Brothers and others.

Rockabilly has remained popular through the years due in part to young musicians borrowing the music’s sound, yes, but also its attitude and its sense of fashion. Even in the sounds of punk music you can hear the grumpy swagger of Gene Vincent and the careless attitude of Eddie Cochran. Throughout the 1980’s and into the new millennium, new bands have sprouted that carry on the tradition; Stray Cats/Brian Setzer, The Reverend Horton Heat, Chris Isaak and Steve Earle to name a few. Two personal notes: rockabilly has spawned its own subgenre. “Loud, frantic rock music” that combines elements of rockabilly and punk rock is called “psychobilly” – and this is one of my all-time favourite genre names. I just like saying it. “Psychobilly”. The other note concerns Chris Isaak. I’ve loved Chris for many years and back when I was a teenager I was surprised to find someone else who also liked Chris. He was a guy at work we called “Face Man”. He was something of a “himbo”; he was very attractive but not smart. Face and I were talking about Chris’ unique sound and I said it was “like rockabilly”. “Yeah!”, Face Man said, “‘Rockabilly’! Good word”. The guy thought I made the term up right there on the spot.

Rockabilly culture remains very popular today and includes not only the music, new and old, but hot rods and tattoos, greased hair and fishnet stockings and jazzbo lingo that borrows heavily from the 1920’s and 1930’s. Young people of today that embrace this sound owe something to teenaged Carl Perkins who did much to originate rockabilly in honky tonks in western Tennessee. 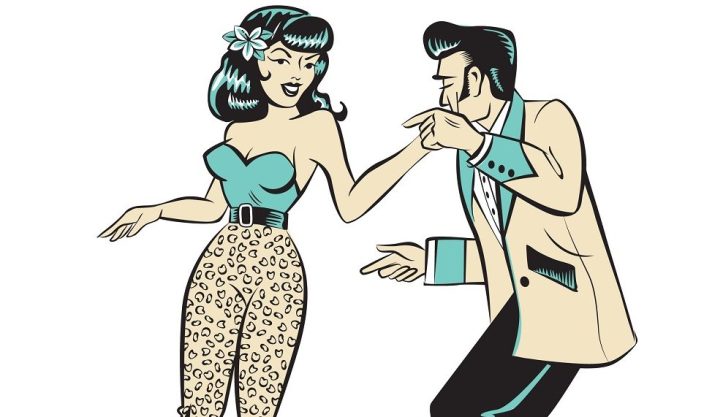