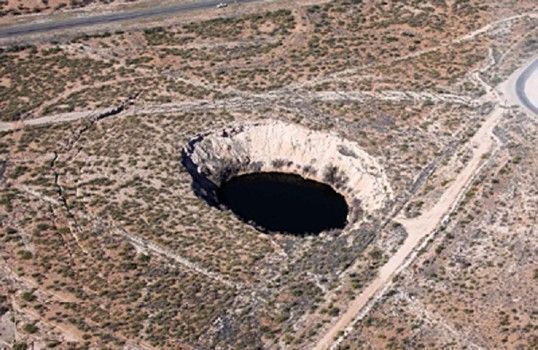 I was researching an article on singer Roy Orbison. Where does such research start? Place of birth. Looking up Orbison’s origins lead me on an expedition that became akin to actual archaeology; perhaps the closest this vintage media archaeologist is likely to come to actually sticking a shovel in the ground.

Roy Kelton Orbison was born where singer and trombonist Jack Teagarden was born, Vernon, Texas. In 1946 when Roy was 10, he and his family moved to Wink, Texas. Wink is located in Winkler County in northwest Texas near the New Mexico border. Actually, Wink is not near anything; it’s 70 miles west of Odessa and 231 miles east of El Paso.

Wink was a tumbleweed until oil was found there in 1926 and in the next 3 years the population jumped from, like, zero to a number that could have been 25,000. The boom lasted only a few years and eventually the number of people in the area went from 25,000 down to today’s population of 940 and businesses went from 180 down to 20 and, by the late ’80’s, 5. Five businesses. Wink often records some of the highest shade temperatures in the country with readings regularly above 110° F (43° C).

Through the years, Orbison expressed disdain for Wink describing it as “football, oil fields, oil, grease and sand”. Orbison may have been hassled regularly by schoolmates at Wink High School, home of the Wildcats and designated a Texas Historic Landmark in 2012.

Here’s the thing, though; decades of drilling for oil have resulted in two massive sink holes, referred to as Wink Sink 1 and Wink Sink 2. The first hole “formed” on June 3rd, 1980. Now, let’s stop right there and ponder this. One fine June morning in Wink and it’s maybe 98° in the shade and you’re out for a walk. You hear a rumble. An overhead plane? Nope. Earthquake? Not here. No, what you hear is a sink hole forming! One minute it’s not there – you could be walking on this ground – and the next minute a hole opens up in the earth 360 feet across and 112 feet deep! As if that’s not enough, Wink Sink 2 forms on May 21, 2002. Sink 2 has grown from 450 feet across to 820 – and it is only ONE MILE from Sink 1. And this second hole has grown – gotten bigger – over time by almost 400 feet.

Satellite imagery shows that these holes are still growing and could converge into one massive pit; can you imagine? They are a mile apart. Other holes could easily form, as well. Gas and oil production equipment is situated nearby as well as hazardous liquid pipelines; if any of these things start collapsing, the area could become something of a bio-hazard.

The holes have strengthened the rivalry between Wink and it’s larger neighbour, Kermit. The two locales battled over what to name the chasms; “Wink Sink” won out over “Kermit Krater” and “Guacamole Hole-y” – the water in one hole is green. Residents aren’t overly concerned about any impending disasters, though. In 2016, Wink Sheriff George Keely said the “impending disaster” he was more worried about was Hilary Clinton becoming president. One thing that does bother Sheriff Keely, though, is driving on roads near the craters, roads that could collapse seemingly any day.

Well, this was a quick trip. The material remains include the classiest rock vocalist of the golden era who lead us to a couple of huge holes in Texas. At least these are holes I didn’t have to dig. But I would have.