“Definitions confuse as much as they illuminate…so why spend so much time arguing who is and who isn’t a jazz singer if the term is so vague that it really doesn’t tell us anything? The main thrust of this work is the interaction of jazz and pop singing, from the pure, undisputedly jazz kind (Armstrong) to the sort where it’s difficult to tell if the [term “jazz singer”] applies (Crosby).”

“Jazz Singing: America’s Great Voices from Bessie Smith to Bebop and Beyond” by Will Friedwald (1996) 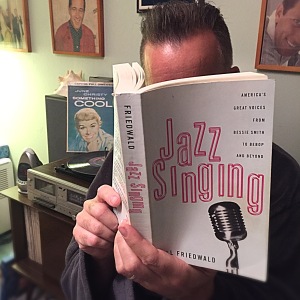 I’m reviewing this book as part of my “Words With Wellsy” segment on the Cocktail Nation radio show podcast.

I’ve always been a big reader of liner notes. In some instances, you can learn a great deal from the booklet that comes with a compact disc. Quite often, the essay is commissioned to an expert musicologist that will write notes, obviously, that deal specifically with the content of the CD. Which is obvious, yes, but my point is that the liner notes can provide pertinent information about the specific set of songs you hold in your hand and that info can be hard to come by from another source.

Years ago, I started to notice an author’s name accompanying these notes. The name was Will Friedwald and often it would be noted that he was the author of Jazz Singing. I began to think that this was a book I should buy and read and so I did.

What strikes you early on reading this book is that Will doesn’t pull any punches. He gives you his blunt, honest assessment of singers. He cuts me deep when he ravages my beloved Ink Spots by calling their music “the most monotonous and repetitive of all formulas”, “insufferable…unbearably square”, “godawful” and lowers the boom on Andy Williams. Andy, Friedwald says, “exemplified the (Mitch) Miller ideal of absolute badness”, calling him “‘King of the Middle-of-the-Road'”…”whose voice might be nice enough to make you forgive the rotten songs and the Muzaky backgrounds he covered them in if only he didn’t completely lack the gift of singing words as if they meant anything to him”. Ouch. Friedwald is also the man who said that Bono singing “I’ve Got You Under My Skin” with Frank Sinatra sounded like “animal vivisection”. This all may sound harsh but this book is business. Friedwald is not assessing cozy sounds that make you feel good. He’s applying rigid criteria to these singers when he is evaluating their contributions to jazz singing and to jazz-based vocalizing.

I was fascinated by a few of the positive things he puts forward. One was that Mel Tormé is the only male singer that deserves to be considered second to Sinatra. Friedwald says it’s Sinatra on the men’s side and Ella Fitzgerald and Billie Holiday on the ladies’ side – the former for her mastery of the melody and the latter for her interpretation of a lyric. Other things include that he hears a real jazz sensibility in the gentle crooning of Perry Como. He illuminated June Christy’s “Something Cool” for me and introduced me to the stars of vocalese. He suggests that Tony Bennett has based his whole catalogue on Sinatra’s “Where or When” – a song that builds up to a dramatic crescendo. While Bobby Darin, Friedwald asserts, built his career as a crooner on Frank’s “I’ve Got You Under My Skin” – a gently swinging first half and a rousing second half.

You have to keep in mind that the book, after all, is called JAZZ Singing. He’s evaluating all these vocalists through the prism of jazz which is an exacting measurement. Indeed, the best pop singer probably isn’t as technically proficient as a mediocre jazz singer. So “jazz singing” indicates the highest of standards. Of course, you could look at this as an almost condescending attitude ie, the Inks Spots’ songs all sound the same so they suck! This attitude also may explain why a singer like Harry Connick is not mentioned – not all of his albums have been in the jazz idiom, so he doesn’t count. He’s not jazz enough. It actually seems that Friedwald has a disdain for pop. The Platters? Forget it. And even when venerable singers, vocalists Will has already praised, like Dinah Washington or Nat Cole, stoop to record pop songs, the author is merciless in his wrath.

Friedwald’s style is coldly efficient and rigid. That’s what you want sometimes. Sometimes you want a truth merchant. I particularly need that because I don’t often know whether a singer is actually “good” or not. If I get something from the Ink Spots – and I get LOTS from them – then they’re great to me. Same with Andy Williams. I find through the years I have gone with what Will says though, even though it may sometimes be hard to hear. I respect his opinion. To a fault, maybe; I’ve never heard Diane Schuur sing but I think she sings lousy because Will said so. I can often be wishy washy and defend singers by talking about the intangibles, the way they make me feel. For example, Johnny Mathis’ vibrato drives me nuts but I love the mood of his records. Well, Friedwald don’t truck with that. The book is not about how a singer makes you feel on a winter night by the fire. The book is about whether or not a given singer has the chops.

Will Friedwald is also the co-author of Tony Bennett’s autobiography and the author of the stunning book Sinatra! The Song is You: A Singer’s Art. He’s also written a book with the intriguing title Playboy Swings: How Hugh Hefner and Playboy Changed the Face of Music. Something else I ran across about Will Friedwald is that he reportedly owns the largest iTunes music library in the world. 849 GB, 172,150 songs stored on his impressive-sounding PowerMac G5. Keep in mind this was in 2007.

I would go so far as to say that Will Friedwald’s Jazz Singing is the place you should start if you want vocal music illuminated for you. You can find it at Amazon and at AbeBooks. To hear my review of this book on Koop Kooper’s Cocktail Nation radio show, click here.