Love in a Tower: A Leisurely Look @ “Manhattan Tower”

Early in my discovery of the classy side of mid-20th century music and media – some twenty years ago – I stumbled on The Complete Manhattan Tower on vinyl at a garage sale. I still remember the house I bought it at. As I say, it was early, so I didn’t immediately appreciate the enormity of the find. If I’d known, it would have been cause for celebration.

The story of Manhattan Tower starts with it’s composer, Gordon Jenkins. Born in Webster Groves, Missouri in 1910, Jenkins got his start arranging and conducting on radio and with the big bands. He made records with such vocalists as Louis Armstrong, Dick Haymes and Billie Holiday; Jenkins conducted and produced Holiday’s last session for Decca Records.

Jenkins also recorded for Decca under his own name. One of his early works became one of his most renown. In 1946, Jenkins issued Manhattan Tower, a long-form musical suite that told the story of a young man’s first experience with New York City. The tale is Jenkins’ own. He arrived in the big city from Webster Groves in 1929 and was unsuccessful in finding gainful employment. He returned home to “plan a future siege against the city with which he had fallen hopelessly in love”. Jenkins did return to Manhattan and started making his name although his work eventually took him to the west coast. Manhattan Tower was one of the first programs that Decca issued in all the formats currently used at the time – a 45-RPM set, a 45 Extended Play package and a 33 1/3-RPM long-player. The LP was backed with another early Jenkins composition, California.

In the mid-1950’s, with the advent of stereo, Jenkins re-recorded and expanded Manhattan Tower and it was released by Jenkins’ then-current label, Capitol Records, in 1956 as The Complete Manhattan Tower; this is the version we will concern ourselves with here.

Manhattan Tower is the tale of Steven, a young man from a rural upbringing who makes the trip to the big city. He is immediately captivated by Manhattan, its hustle and bustle and its impressive skyline. At the outset, the luxurious music is of longing. It is an emotional moment for Steven as he has always dreamed of this day, the day he would arrive in the city and see his tower for the first time, although he has seen it many times in his dreams. Once upstairs, he revels in the views and opens the windows to let in the city noise, the symphony of the street.

There follows some light, comedic moments – as there are throughout Manhattan Tower – the same as you would find in any stage or movie musical and then Steven meets Julie in a “Men Only” bar. After a hansom cab ride through Central Park, they realize they are in love. Steven takes Julie back to his tower.

Here, the lovers fall hard for each other. The song “Never Leave Me” passes between them, a song with the patented Jenkins strings in full array. I have read that parts of Manhattan Tower are “corny” but I beg to differ. The blush of first love is not hokey, it is serious, deadly serious. Feeling this way about a love that may not last may make the participants naive but that doesn’t make the feeling any less poignant. Steven, in particular, seems determined to make his first love last forever – “the tower would always be our home” – and it can be nice for an old, hardened veteran to hear the story of the first-timer. The novice, after all, is not yet burdened by life and experience and it makes the listener harken back to younger days before hard times made a hard heart. He is fervently earnest, as only a beginner in love can be. Listening to this is akin to watching a child on Christmas morning. On this hopeful note, the first side of the record ends.

In what may be an aberration for 1956, it is the woman in this situation who doesn’t want to get married and here we find the first intimation of trouble in our tale. Julie sings the popular song from the program, “Married I Can Always Get”; “matrimony is not for me”. Steven has been in the clouds and now this. Listening to Manhattan Tower again recently, it may have occurred to me for the first time that it really has been Steven leading the charge. You could even be forgiven for thinking Julie has made little investment here. Even earlier, it is he who first says “I love you” to Julie and has to coax a response from her (“Repeat After Me”).

After a big party in the tower, suddenly it’s over. After two days riding their blossoming love, Steven and Julie must part; for some reason, Steven has to leave and return to his home. Another clue that might indicate that Steven is more invested than Julie is that at this point she is practical. She says they should be grateful for what they have enjoyed and she says “goodbye, Steven”. His response comes in the narration: “no lovers taking separate paths ever experienced more regret than I”. “More regret than I“. He leaves his tower and his city, traveling on the westbound train but with hope, he promises to return, for…

“I left my heart behind in that tower…”

Elliott Lewis narrates the story as Steven. Ever since this early exposure of mine to Lewis’ voice work, I always notice his name when I hear it among the cast of various of my beloved old-time radio shows. Appropriately, Lewis was born in New York City and was a master sergeant with the Armed Forces Radio Network during World War 2, a service for which he received the Legion of Merit. Lewis made his name on radio on The Phil Harris-Alice Faye Show and appeared extensively on many other shows throughout the golden age. He ended up producing on television, his last credit coming as executive script consultant on Remington Steele.

Lewis was cool enough to marry a “surfer/model” in 1940 in Las Vegas though the marriage was annulled a month later. He then married another voice actor, Cathy Lewis – interestingly, the pair already shared a surname. The couple ran the mystery series Suspense and Cathy gained a measure of fame on My Friend Irma. One of her few movie appearances came in 1961 with Sinatra in The Devil at 4 O’Clock. Lewis and Lewis separated on their 14th wedding anniversary and later divorced. Elliott Lewis’ last wife was Mary Jane Croft who played the Ricardo’s Connecticut neighbour on I Love Lucy and also appeared with Lucille Ball on The Lucy Show and Here’s Lucy. Lewis and Croft had a son – actually from Croft’s previous marriage – who was killed in Vietnam.

Bill Lee does the singing for Steven. Bill was a “playback singer” who sang on another work by Jenkins, Seven Dreams.  Lee spent his career providing singing voices for actors who couldn’t sing and animated characters, working extensively for Disney. Lee’s voice can be heard in Peter Pan (1953), Seven Brides for Seven Brothers (1954), Lady and the Tramp (1955), South Pacific (1958) and The Jungle Book (1967). He provided the singing voice for Yogi Bear and Canadian Christopher Plummer in The Sound of Music (1965). Beverly Mahr sings Julie. I had to look her up but it was kind of a trick as Beverly Mahr is really Beverly Jenkins. Gordon and Beverly were married in 1946 and in 1964, Mr. and Mrs. Jenkins together recorded the LP My Wife, the Blues Singer which featured, you guessed it, Bev singing blues songs. It is apparently quite good.

Other versions of Manhattan Tower include a 1956 album by Patti Page on Mercury Records. On her version, Patti runs through the songs presented on Jenkins’ album and adds a few others. She finishes her album – perhaps jarringly considering how things end on the composer’s record – on a high note with “The Party (Noah)” and this track is the only time on her record that Patti presents narration.

In 1964, Jenkins got together with Robert Goulet to record Manhattan Tower and in Goulet Jenkins finds a singer perfectly suited to this piece. Goulet handles the narration – which he performs throughout the program – like the Broadway performer he was at heart. Other singers have essayed songs from this work and released them as singles, particularly “Married I Can Always Get”. Singer and model Micki Marlo recorded this song and it served as the title track to an album she released. Teddi King and Jeri Southern issued 45s of this track and Sammy Davis, Jr. and Ray Charles have recorded “New York’s My Home”. 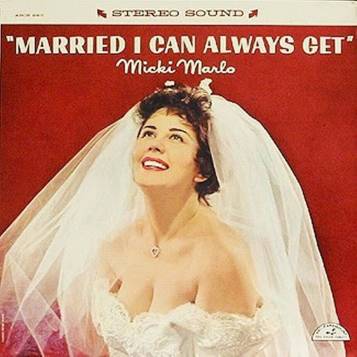 Manhattan Tower has been called the first “concept album” and this record stands as the only real success of a somewhat short-lived trend that saw Jenkins produce such “AlbuMusicals” as California, Along Fifth Avenue and Seven Dreams. The format did not catch on, however, which adds to the unique kitsch value of Manhattan Tower. Jenkins’ story of love in a tower has remained pretty much underground but scouring the internet has unearthed what has been referred to as the “cult of Manhattan Tower“. 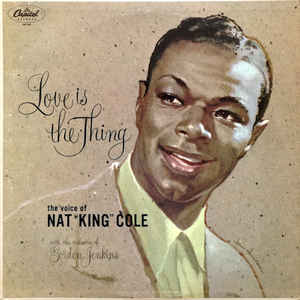 Gordon Jenkins, as most of you know, would go onto provide sumptuous backgrounds for some of the most magnificent music ever made. His work can be heard backing Nat Cole on the gorgeous Love is the Thing and three other albums, Frank Sinatra on no less than 8 records, notably winning a Grammy for 1965’s September of My Years and scoring the “Future” suite on Frank’s 1981 release Trilogy: Past Present Future. His work can also be heard supporting the Andrews Sisters, Ella Fitzgerald, Hoagy Carmichael, Judy Garland, Jimmy Durante and even Harry Nilsson.  When you consider that he worked with Louis Armstrong, Frank Sinatra, Ella Fitzgerald, Judy Garland, Billie Holiday and Nat ‘King’ Cole you realize that he was in demand by the very biggest names in the business. Gordon Jenkins died of Lou Gehrig’s Disease in Malibu in 1984, aged 73. He left behind some exquisite music, perhaps the most pleasing of which is the music he recorded under his own name, the music of Manhattan Tower. It is an enduring and charming remnant of a time in which many of us are still trying to live.

There are many indelible images in 1951's A Place in the Sun. On a recent viewing, I really noticed what director George Stevens and cinematographer William C. Mellor did with the visuals. This added to the performances makes for a striking viewing experience. And I still can't get over the fact that Elizabeth Taylor is 17 here. Read my thoughts. Link in bio. #elizabethtaylor #liztaylor #montgomeryclift #director #cinematography #cinematographer #50smovies #50s #blogger #blog #classic #vintage
Fred Williamson was born March 5, 1938 and turns 83 today. Former football player The Hammer can be seen in M*A*S*H, Black Caesar and From Dusk Till Dawn. My favourite is Three the Hard Way (1974). #botd #otd #fredwilliamson #football #actor #legend #blaxploitation #70s #70smovies
Luke Perry
Recently I revisited a novel from my favourite author, F. Scott Fitzgerald. I read it first in my youth and wondered if it would have the same effect on me. My latest article is a look at this book of 1920s café society. Link in bio. #bookstagram #book #booklover #bookcommunity #bookrecommendations #bookreview #fscottfitzgerald #blogger #bloggerstyle
In my monthly look at the oldies, the Drifters are featured. This sometimes overlooked group scored many hits despite an ever-changing line-up. Take a look at their iconic sides and lesser-known beauties. Link in bio. #thedrifters #oldies #oldiesbutgoodies #oldiesbutgoldies #50s #50smusic #rockandroll #soulmusic #classic #vintage #blogger #blog
Harry Belafonte turns 94 today. His 1956 album Calypso was the Number One record in the country for 31 weeks and was the first LP to sell over a million copies. It is one of the first records a serious collector of mid-century vinyl should seek out. #harrybelafonte #botd #otd #calypso #legend #vinylcollection #vinyl #vinylcommunity #vinylrecords #classic #lp #lps #album