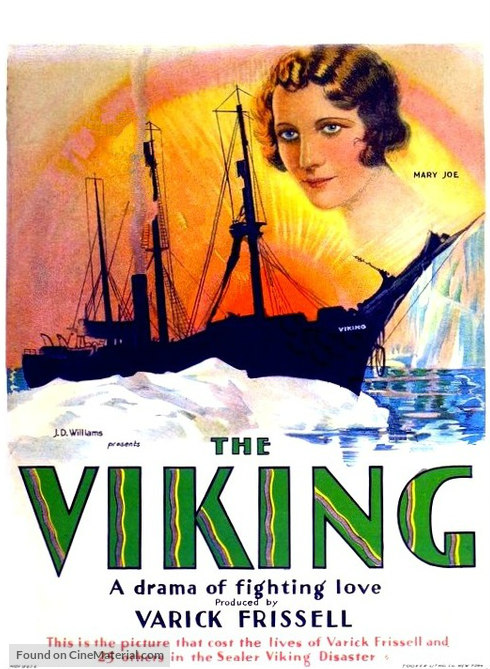 Starting every November 1st and ending on Remembrance Day, I watch as many war movies as I can. I’m always deeply affected when I consider the sacrifices of so many, particularly in World War 2. In my search to watch a movie I had never seen, I stumbled on a film from American International in 1958, Suicide Battalion, starring Mike Connors and John Ashley.

Do not get me started on how terrible this movie is. Now, if you know me at all, you know that I generally care nothing about the quality of a movie; I have many guilty pleasures and often get a real kick out of the worst movies. But Suicide Battalion is utterly ridiculous. Lou Rusoff, Samuel Z. Arkoff, James H. Nicholson, John Ashley…many names from the AIP stable that have made films that have filled me with such joy in the past were on hand to make this film but it has ZERO redeeming qualities. This “war movie” features a ridiculous sequence wherein Ashley’s character attempts to get permission to marry a local girl while there is carnage going on all over the island. And when the squadron gets stuck with a female news photographer who has missed the last boat out before the Japanese attack, they give her a gun and she shoots a guy!

Anyways, terrible movie but I’m curious about Jewell Lain who plays the lady photographer so I look her up – bupkis. Another name in the cast list was that of Marjorie Stapp. Lain and Stapp are two good examples of the type of actress that fascinates me; worked in Hollywood making movies but literally only a handful and then spent their lives doing something else. Stapp, I learned, enjoyed one of her few starring roles in the western The Blazing Trail (1949) that starred Charles Starrett, another name that interested me. Funny; a highlight of Stapp’s career was playing the leading lady in a film alongside a “star” like Starrett – whom I had never heard of.

Starrett was best known for portraying the Durango Kid in films for Columbia – when Starrett retired from acting in 1952, he “held the record for starring in the longest-running string of feature films”, 131. One of them really caught my eye; the 1931 film The Viking.

Sidebar: this took me on a tangent to a 1928 film bearing the same name. The 1928 film was “the first feature-length Technicolor film that featured a soundtrack, and the first film made in Technicolor’s Process 3” and starred Donald Crisp as Leif Ericsson. This film turned me on to Newport Tower in Rhode Island. In the film, it is suggested that this is the very tower, still standing today – one of the oldest buildings in the US – Ericsson had built when he landed in America.

The film that concerns us, though, was described as a “Newfoundland/American adventure film”. My Canadian readers – and my family, many of whom are from Newfoundland – will know how odd that sounds. Varick Frissell was a documentary filmmaker from Boston. Frissell had been mentored by the father of documentary film, Academy Award-winner, Robert J. Flaherty, who’s Nanook of the North (1922) was a ground-breaking docudrama before that was even a thing. Flaherty had an affair with his leading lady on Nanook, a young Inuk girl who bore his never-acknowledged child. 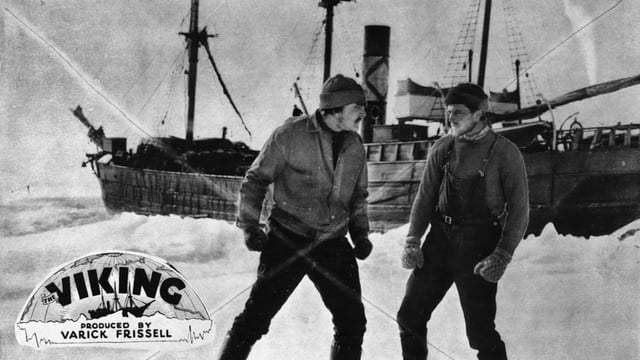 After Frissell heard a lecture by Dr. Wilfred Grenfell, a medical missionary to Newfoundland, Frissell decided to travel to the wild northern reaches of the Canadian province. Upon arriving, he was struck by the stark landscape and began to document the conditions and his interactions with the native people, eventually producing two documentaries before forming his own company, the Newfoundland-Labrador Film Company. Frissell pitched an idea to Paramount Pictures and received financial backing from the studio. The story he wanted to tell was called The Viking, a tale of seal hunters off the coast of Newfoundland.

The name referred to the actual sealing ship used in the film, a 310-ton, 90-horsepower ship built in Norway in 1881. In 1904, it was bought by a St. John’s company for use in the sealing industry and was placed under the command of Captain William Bartlett. For the film The Viking, native Newfoundlander Captain Robert Bartlett, son of William, was hired to portray Captain Barker. Bartlett the younger was a ship’s captain and explorer who led 40 expeditions into the Arctic; more than anyone before or since. The “leading lady” in the film is one Louise Huntington, she of 5 total acting credits.

The Viking is a landmark film in many ways. Significantly, it was the first film ever to record sound and dialogue while on location. Principal photography was completed in the tiny Newfoundland neighbourhood of Quidi Vidi, an historic fishing village. Before Frissell and crew descended upon this quiet backwater – home to many historical sites –  it’s only notable appearance in history was as the site of a series of battery placements dating back to the 1700’s. Frissell then took his crew out to the Grand Banks to film action sequences. The completed film was shown at a theatre in St. John’s in March of 1931 but Frissell was unhappy with it and thought more action sequences out on the icy waters were called for.

Here, Frissell was in luck. The crew of the SS Viking were about to head out for the annual seal hunt and so Frissell, his crew and two stowaways were among the over 140 persons who set sail from the northern coast of Newfoundland on March 15, 1931. Eight miles from the small and barren Horse Islands, the Viking became trapped by the ice. This was a common occurrence, though, for ships operating in these arduous conditions and subsequently these ships carried large caches of dynamite with which to blast themselves free. Before these explosives could be used to this end, however, they detonated of their own accord. 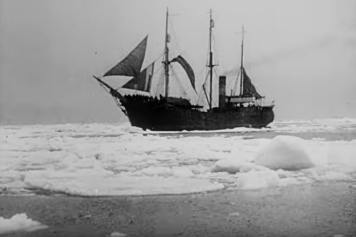 The unexpected explosion blew the stern off the vessel, sending some sailors hurtling overboard onto the surrounding ice. 28 men were killed including Varick Frissell and his cinematographer. The ship caught fire and sank. 118 survivors made the trek over the ice to the Horse Islands. There, Captain Bartlett radioed the Department of Telegraphs: “One hundred and eighteen survivors of the Viking landed here safely. A number of the men are in a weak condition”. Two ships were dispatched with haste to help look for survivors. These ships held sailors and nurses with the same last names as men on the Viking, which gives an indication of life in this tiny community where no doubt many members of the same family were among the workforce.

“Survivors say the magazine exploded blowing the whole stern off the ship while the rest caught fire and is still burning. Men reaching the Island in absolutely exhausted condition and unable to give a coherent account of the disaster”. “It is indicated that twenty is likely to cover the total death list but the number of injured is not known. The fate of the three American picture men is not known but the owners of the ship believe they would be in the saloon at that hour, which was forward of where the explosion occurred”.

The newspaper quoted telegrams sent describing the aftermath and trying to make sense of the accident:

“To minister Mines and fisheries:–

March 16th– fifty or more men landed , others making fair progress towards Island. Explosion as yet unaccounted for. Two crowds have landed and others in sight. Later crowds bringing disabled men…Men cannot account for what are dead as yet. Operator, navigator and doctor missing. Terribly hard to get information from men…men continually arriving at Island. Twenty men are known to be dead. 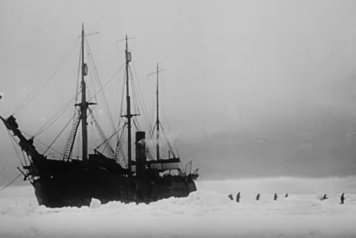 The newspaper went on to note that the annual St. Patrick’s Day parade, held by the Benevolent Irish Society, would be called off. There was initially some conjecture as to whether it was the cache of dynamite or a boiler that exploded. The fact that the detonation could be heard on Horse Island, eight miles distant, indicates that it was indeed the explosives. Unfortunately then, The Viking has gone down in history as the film on which the highest number of people lost their lives.

Upon release, the film (you can see it here) – containing a forward that described the terrible events that marred the film’s production – was generally panned. The New York Times noted that this “audible picture… has many marvellous scenes of the ice fields and of the adventures of men on a seal hunt off Labrador. It is enhanced by being made with sound effects, but the dialogue, like the story, is merely incidental…The authenticity of the scenes is evident throughout, and while the voices are at times none too distinct, this lack of clarity is probably due to the fact that the microphone was used on the spot.”

So, a terrible World War 2 movie lead me to a couple of B movie actresses with minimal credits. One of these ladies lead me to a cowboy actor who had a long run and made a flyer of a film in Canada. On this expedition, I actually felt a kinship with my eventual subject, the late Mr. Frissell. Like him, I explored uncharted territory as I journeyed past Nanook and the advent of the docudrama, visited ship’s captains, explorers and seal hunters and landed at a disaster that saw many lives lost, viewing some interesting newspaper accounts and telegrams along the way. Another successful dig.

I was sad to learn that Barrett Strong died on January 25th of this year at 81.
The other day, somebody asked me what's new. I started to explain and actually got a little choked up.
I don't know when I've ever been more moved by a film. A week ago, I had never seen it. Today, I don't want to watch any other movie. Here we discuss this gentlest of films directed with the lightest of touches by Clint Eastwood. Link in bio.
“From the age of three, Lisa had listened to records in her room instead of playing with other children. But in Tennessee, she had a whole other life. She could eat anything she wanted, squish frogs, spook the security guards at 4 A.M, sign rude autographs at the gate ("F*** you, Lisa Marie Presley”), and race around the grounds in her own golf cart, sometimes with playmates Patsy and Peggy Lynn, the twin daughters of country singer Loretta Lynn, who had met Elvis when they were both in the hospital in Memphis.”
If you're like me - and if you are, I'd be concerned - you're partying like it's 1973.
In a new series launching this year, Vintage Leisure spotlights the many American actors who prolonged their careers by working internationally. Some came back very much in demand and forged successful second acts in Hollywood, others made their homes in Europe where they stayed and became major stars. Some were just cashing in.