The Doors and I go way back. I’ve always owned their The Best of the Doors and I remember one day my friend, Laurie, and I ditched school to visit a friend in the hospital. It was a grey, autumn day, rainy, and we were listening to the Doors. Since then, I often equate the quartet with sullen, ponderous weather. On the other hand, when the warm weather comes, it also seems the right time to roll with the quintessential L.A. band. 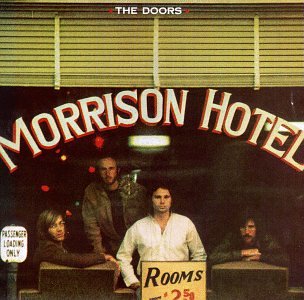 My other early memory of them is of my older brother trying to get me into them. I remember thinking that something was odd about their sound; there seemed to be no bottom end to them. I’ve always been proud of the fact that, even at this young age, I could tell that – in their early days, at least – the Doors employed no regular bassist. Legendary keyboardist Ray Manzarek – who’s sound gave the band their early identity – would often handle many of the bass lines on his keys when the Doors played live. And then my brother played me a song that has become my favourite Doors song, “Peace Frog”, from Morrison Hotel in 1970. Bass guitar – and a bottom end in general – are easily apparent on this track and indeed on the entirety of their last two albums.

While no one “played bass for the Doors”, the band used session bassists on all of their records, starting with crack session man, Larry Knechtel. As a member of “The Wrecking Crew”, Larry played with everyone in the ’60’s and ’70’s. One of the many things that drew me to the album that followed Morrison Hotel, the final Doors album released during lead singer and lyricist Jim Morrison’s lifetime – L.A. Woman – was the knowledge that the bassist the boys had brought in was none other than Jerry Scheff.

Scheff is best known for being Elvis Presley’s bass player and had been playing with the King for a year and a half when he got the call from the Doors. Jim Morrison was particularly excited about Scheff’s presence at the sessions as Jim was a huge Presley fan but the band in general were happy to have a musician with Jerry’s pedigree on board and his style fit in well with the gritty tone of the record. A quick word about Jerry Scheff, still with us as of this writing at 78. Scheff went on to play with Elvis’ “TCB Band” until the end of Presley’s life and even afterwards and is one of the most respected bassists in the business. OK, get ready; Scheff has played with Barney Kessel, Tommy Roe, the Monkees, Nancy Sinatra, Delaney & Bonnie, Howard Roberts, Buckingham Knicks, Bob Dylan, Ray Manzarek, The Gatlin Brothers, Tanya Tucker, John Denver, Johnny Cash, Crowded House, Elvis Costello, Roy Orbison, George Benson, Glenn Frey, Canadians Bruce Cockburn & Ron Sexsmith, Randy Newman, the Association (“Along Comes Mary”), Chicago, Warren Zevon, Johnny Mathis, Neil Diamond, Pat Boone, Sammy Davis, Jr., the Everly Brothers…and Elvis Presley. I think that’s every important artist ever. He didn’t play with the Beatles, I guess, who had a decent bass player of their own. Anyways, L.A. Woman…

The Soft Parade from the summer of ’69 saw the Doors dabbling in overproduced and heavily orchestrated music and the sessions for that album were drawn out and painful. In an effort to get back to basics, the band rebounded by putting out the stellar Morrison Hotel seven months later in February of ’70. To further their comfort levels, for their next album the band set up recording equipment in a home to avoid a stultifying studio environment and began to write songs as a group, jamming and letting the music form organically. The results would see the light of day a full 14 months after the release of Morrison Hotel.

L.A. Woman starts out with some of the meanest, funkiest sounds to ever come out of a white band from SoCal. On “The Changeling”, drummer John Densmore and Scheff are right in the pocket and Manzarek is pumping out riffs reminiscent of Booker T and the MG’s “Hip Hug Her”. This opener contains a fantastic, ragged, growling vocal from Morrison. The first single from the album, released a month ahead of the record, was “Love Her Madly” and it features some great strumming from guitarist and the song’s composer, Robby Krieger. “Been Down So Long” and “Crawling King Snake” are two of the three straight-up blues numbers featured on the record. These two are grinding, savage and menacing and the third, “Cars Hiss By My Window”, is cinematic and atmospheric.

The title track is majestic. The legendary homage to the boys’ hometown is probably the Doors’ best song and it often appears on lists of the greatest classic rock songs of all-time. It is invigorating to listen to. Billy Idol, who had a role in Oliver Stone’s The Doors (1991), covered this tune in 1990. The cool video features Idol using a cane as a result of his recent motorcycle accident. Dig it here. “Hyacinth House” is one of my favourite songs by the Doors. It features some excellent guitar from Krieger and lyrics from Jim that reference Greek mythology. Once, when I was a teenager, I showed my friend, Tony Lembo, a picture of my girlfriend, Joy. He looked at me and said “one day you’ll tell me you broke up with her and I’ll say to you ‘why did you throw the jack of hearts away?'” Tony was always a bit out there; sometimes he thought he was Jim Morrison.

“The WASP (Texas Radio and the Big Beat)” is certainly an interesting song. Featuring Jim reciting his poetry, the backing track is similar to other tracks on the record; mean, punctuated by Robby’s guitar riffs, Densmore’s pounding drums and Ray’s freaky, swirling organ. And speaking of “atmospheric”, few songs in classic rock contain the aura of the album’s closer, “Riders on the Storm”. Certainly few classic rock songs this side of Steely Dan are as jazzy as this song. The song starts off with the sound of rain followed by Densmore’s ride cymbal and a great bass line from Scheff. Ray’s tinkling keys and a couple of effective strums from Krieger lead to Jim’s entrance. I love how he’s gone back and doubled his vocal using a whispered voice. Krieger later makes a quick statement and Manzarek starts his incredible solo, steeped in the jazz tradition. The tune was inspired by “Ghost Riders in the Sky” and Jim’s lyrics may reference “spree killer” Billy Cook and a German philosopher has conjectured that the lyrics “into this world we’re thrown” may reflect “Heidegger’s concept of “thrownness” (human existence as a basic state)”. Say what, now? “Riders on the Storm” was the last song recorded by all four members of the band and Jim Morrison’s last recorded song to be released in his lifetime. It was issued as a single (“The Changeling” on the B side) in June of ’71; Morrison died in early June.

So, that was effectively it for the Doors although the band without Jim did release more albums and they are some of the most interesting curiosities in rock history. The three remaining members released Other Voices in ’71 and Full Circle in ’72. I worked at a community radio station in the late 1980’s and they had Full Circle on vinyl. If only I’d been more mercenary and taken it home. The critics did have positive things to say about these two records, particularly the former, and the latter yielded an actual hit when “The Mosquito” charted in several countries. But, c’mon; the Doors without Jim Morrison?

It does, however, put me in mind of the Beach Boys in the late ’60’s. Their driving artistic force, Brian Wilson, was sidelined but the band was still comprised of competent musicians with something to say and so they carried on. Unfortunately, the fortunes of many bands are tied to one of their members and without him the unit suffers. Lucky for us, the Doors released L.A. Woman before the Lizard King broke on through to the other side.

Produced by The Doors and Bruce Botnick

Side Two: “L’America”, “Hyacinth House”, “Crawling King Snake”, “The WASP (Texas Radio and the Big Beat)”, “Riders on the Storm”