Dean Martin hit ‘legend’ status early. By the late 1960’s, his records weren’t charting anymore and he wasn’t starring in hit movies. But it didn’t matter. He performed on stage in Las Vegas and elsewhere to sold out crowds. Dino played it “drunk” and sang all the old songs and the people loved it. He gathered his celebrity friends together to put on one of his legendary “Dean Martin Celebrity Roasts” and the people laughed. Funniest of all was watching Dean, laughing harder than anyone. And not just at Don Rickles ripping people to shreds, either. You could believe that he was laughing mostly because he truly had it made. He could sustain a career and reap the rewards with very little effort. He just had to be himself.

The thing about Dean Martin is that he didn’t care. Now, as soon as you say that, it sounds negative. But I don’t mean to say that he had a poor attitude toward things or he was indifferent to his family and friends. When I say he didn’t care I mean that, for the most part, he wasn’t consumed with striving to attain a level of greatness in his singing or his acting. He could sing. He could sing well. He liked to sing. So, he sang. Period. And the record buying public loved it. His talent was based on ‘feel’ as opposed to ‘craft’. He had ‘a way with a song’. While making movies, he was laid back and jovial on set. When the cameras rolled, he acted naturally and his charisma shone through. But that’s not to say he wasn’t good – very good – at what he did. Watch him in his films with Jerry Lewis and you’ll see that Jerry is bang on when he talks of Dean’s comedic timing and his handling of a funny line. Not to mention the looks and expressions he could pull off in place of a spoken punch line. It all came so naturally to him. That is what is at the root of his greatness – it was all so seemingly effortless. He was so completely confident and sure of himself that he was able to simply be himself his entire career. This is what people today remember most about Dean Martin. His attitude, his coolness. He was also successful when he went looking for a stretch and played it serious in films like “The Young Lions” with method actors Marlon Brando and Montgomery Clift or “Rio Bravo” with John Wayne. While making records, he could delight you with joyous recordings like “That’s Amore” and “Ain’t That a Kick in the Head” but he could also make you close your eyes while his voice washed over you with the smoother sounds of “Once in a While” or “My One and Only Love”. With a change of sound upon moving to Reprise in the ’60’s, he could still delight listeners with a jaunty run-through of “I’m Gonna Change Everything” or make them shake their heads and sigh with the heartbreak of “Nobody’s Baby Again”.

In the interest of taking care of business, it should be noted that the last years of Dean Martin’s life were not happy ones. One of Dean’s sons was Dean Paul Martin, who was known as “Dino”. Young Dino was a noted tennis player and a minor actor. He starred in a TV series in 1985-86 called “Misfits of Science” that also starred Courtney Cox. Dino was also a pilot. He joined the California Air National Guard and rose to the rank of captain. He died in 1987 when his jet crashed into the San Bernardino Mountains, the same mountains that had claimed the life of Frank Sinatra’s mother, Dolly. Losing his son devastated Dean and he was truly never the same. In 1988, Frank Sinatra organized a series of reunion shows featuring himself, Dean and Sammy Davis, Jr. Frank reportedly said that the main purpose of the reunion shows was to give Dino something to do, to get him out and about, to maybe forget his troubles. But Dean’s heart was never in it. He lasted only five performances before bowing out. In the fall of 1993, Dean was diagnosed with lung cancer. He died Christmas Day, 1995 of acute respiratory failure resulting from emphysema. He was 78.

But enough of that. We’re here to celebrate Dino’s LIFE. His legacy is remarkably full and varied. He made many great comedy films in the golden age of Hollywood with one of the greatest and most celebrated comedians that ever lived. He recorded timeless music in his early days, sprinkling lovely Italian melodies amongst gems that are the very definition of mid-century crooning. His alliances with other legends added a luster to his personality as regular joes looked at him as the ultimate ‘pally’: the perfect guy to hang out with. In a tux at Romanoff’s or a sport shirt in the clubhouse after a round of golf. He epitomized the swank Las Vegas lifestyle and aura that appealed to royalty and working stiffs the world over. With his many westerns he won over many fans of that hardy, masculine genre. Adding to this was the appeal of his style of country crooning throughout the 1960’s – just one more way he endeared himself to the majority of the adult record buying public. It seems today he is remembered for one major thing. His most lasting legacy seems to be COOL. When hip, happening people of today look back for inspiration when it comes to handling the lady, handling the cocktail, handling the situation no matter what it is – and handling it dressed to the nines – they all seem to land on Dean Martin. He may have had equals but was there ever anybody cooler than Dino? I don’t think so. As Dean’s character in “Ocean’s 11”, Sam Harmon, said: “Everywhere I go people stare at me in dumb admiration”. Yes. We do. 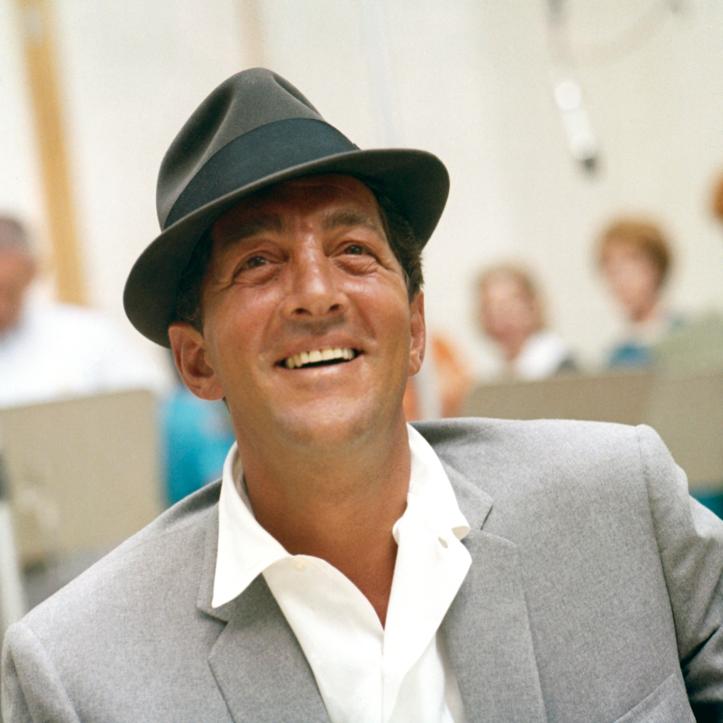