I’ve been listening to what I call oldies radio for over thirty years. Over that time, I’ve obviously come to know most of the artists that plied their trade on the pop charts throughout the “golden era”. This era gave birth to the “one-hit wonders” who’s glorious claim on history lasted the two minutes of a 45 RPM. Other artists were more prolific and during a life spent listening to oldies radio, I’ve realized that some artists have many songs that were not only successful but they have songs and a style that I have come to love. One such artist is Lesley Sue Goldstein.

Goldstein was born to an upper middle class Jewish family in Brooklyn, New York. Her father, Leo, owned his own company, called Peter Pan, that specialized in children’s undergarments and swimwear. His company was successful enough that he was able to move his family to toney Tenafly, New Jersey. Tenafly is still today a well-to-do suburb of New Jersey with high taxes, great schools and restaurants and where the homes go for over a million. Many New York Yankee ballplayers have set up housekeeping here. Edie Adams, Glenn Miller and Rick Nelson and Paul Sorvino and their families have all at one time or another taken up residence in Tenafly.

Lesley and her family prospered in Tenafly and it was while Lesley was taking vocal lessons in New York that she was discovered by Quincy Jones. This part of Lesley’s story fascinates me; the fact that this young, Jewish white girl who came to have a penchant for singing teenage laments in a very white pop style was mentored and produced by Jones, an eventual legend across all genres but one with strong ties to black music. But combinations like this are part of what makes pop music so cool and unpredictable.

In February of 1963, Quincy sat with Lesley in the family’s living room in Tenafly going through a stack of almost 200 demo recordings, trying to pick ones they both liked that Lesley could record. One of the demos was “It’s My Party”, a song that had already been recorded twice. Lesley proclaimed the song “not half bad” and put it on the “maybe” pile. When none of the other demos proved acceptable, they decided to give “It’s My Party” a try in the studio. Added to the duo of Lesley and Quincy was German Claus Ogerman who arranged the song and many of Lesley’s subsequent hits. Ogerman would also go on to do great work in the field of bossa nova with Antônio Carlos Jobim, Frank Sinatra and Diana Krall. Lesley, Quincy and Claus; quite a diverse and effective team.

In an interesting anecdote similar to one told about “Strangers in the Night”, Phil Spector had also heard the demo of “It’s My Party” and decided it would be perfect for his girl group the Crystals. The day Spector recorded it, he coincidentally ran into Quincy Jones and the two producers talked. With neither knowing of the other’s interest in the song, Spector mentioned to Jones that the Crystals had just cut “It’s My Party”. Quincy mumbled a goodbye and rushed to the studio and made 100 test pressings of Lesley’s version for distribution to radio stations, hoping to beat proven-hit-maker Spector to the punch. Quincy was successful.

Within days, Lesley was surprised to hear her song on the radio, credited to Lesley Gore; Gore being Lesley’s mother’s maiden name. Inside of a month, “It’s My Party” was the number one song in the country and Lesley had gone from being a young girl taking vocal lessons, to going through demos with Quincy Jones, to recording a song arranged by Claus Ogerman, to one-upping the titan Phil Spector and having a massive hit record (also #1 on the R&B chart), one that would become iconic. And the thing that maybe blows me away the most is that all this took place while Lesley Gore was only 16 years old! 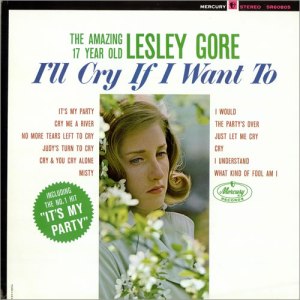 “It’s My Party” had literally rocketed up the charts. It debuted at #60 on May 11, 1963 (Lesley had turned 17 nine days earlier) and then made a fast climb; #26, #9 and then #1, taking the top spot from Jimmy Soul’s “If You Wanna Be Happy”. Amazingly, all this was happening while Lesley was in high school where she stayed throughout her hit-making years, reserving summers and holidays for recording sessions and performances. I’m imagining her sitting in class while those around her are listening to her on the radio and watching her on TV. Disc jockeys would play her records and say “that was Lesley Gore, the sweetie-pie from Tenafly!” From there, it wasn’t too hard for listeners to figure out where she lived and they began hanging out on her front lawn.

Lesley’s next three singles reached the top 5; “Judy’s Turn to Cry” was a clever sequel to “It’s My Party” in which the tables are turned and Les gets Johnny back. One thing always made me laugh, though. In the lyric, Johnny and Judy have the cajones to walk into Lesley’s party like a couple. Lesley is hurt and “felt like making a scene” so she kisses some random guy. Johnny gets mad and punches this guy. I always felt bad about this poor shlub sitting at this party having a Coke and out of the blue he’s getting punched out! This, however, shows Lesley that Johnny still loves her and the two are reunited.

“She’s a Fool” hit #5 and Lesley’s next single, “You Don’t Own Me”, hit #2 where it sat for three consecutive weeks being kept out of the top spot by “I Want to Hold Your Hand”. “You Don’t Own Me” has become iconic as a feminist anthem. The lyrics are a strong statement of independence as they warn a boyfriend not to get possessive or controlling. “Don’t tell me what to say and don’t tell me what to do” was a strong statement from a 17-year-old girl in 1963. I have heard it said that it is ironic that this song was written by two men but I don’t put too much stock in that. After all, it is possible that back in that day lots of men understood women and their struggles at that time and not all were misogynistic. Remember; Aretha’s “Respect” was written by a man.

Lesley continued to have hits into 1965 with “Maybe I Know”, “Look of Love” (my absolute favourite; delightful chord changes) and “Sunshine, Lollipops and Rainbows” which was written by Marvin Hamlisch and sung by Lesley in the film, Ski Party. The more mature “California Nights”, another Hamlisch composition, charted in early 1967 and Lesley sang it on an episode of Batman but this track signalled the end of her chart reign. This was the last hit record for the most successful solo purveyor of the girl group sound. She was not yet 21 years old and had enjoyed a chart run of four years that included a #1 song and eleven Top 40 hits. It started with the innocent adolescence of “It’s My Party” and ended with “California Nights”, a song that hit #16 on the same chart with such sophisticated fare as “Happy Together”, “Penny Lane”, “For What It’s Worth”, “Strawberry Fields Forever” and “Epistle to Dippy”. Quite a run.

Lesley completed her education at Sarah Lawrence College, an all-female university, while continuing to record. Mercury lead her in a soul music direction hoping to duplicate the success Dusty Springfield had with her Dusty in Memphis album but it did not pan out and Mercury cut Lesley Gore loose.

In 1980, Lesley worked on songs for the soundtrack of the movie Fame with her brother, Michael. The pair were nominated for an Academy Award for the song “Out Here on My Own” – losing out to the title track for the film co-written by Michael. Interestingly, the script for Fame was written by another Gore, Christopher – but he is NOT part of the Goldstein family. In 1996, Lesley co-wrote “My Secret Love” for the film Grace of My Heart. This was a film that looked at the pop music scene of the early ’60’s that featured characters based on many real life artists. Unfortunately, Gore felt used by the producers of the film and the experience turned out to be a negative one. Gore’s song was sang in the film by “Kelly Porter”, a closeted lesbian portrayed by Bridget Fonda. Lesley herself came out as gay in 2005. 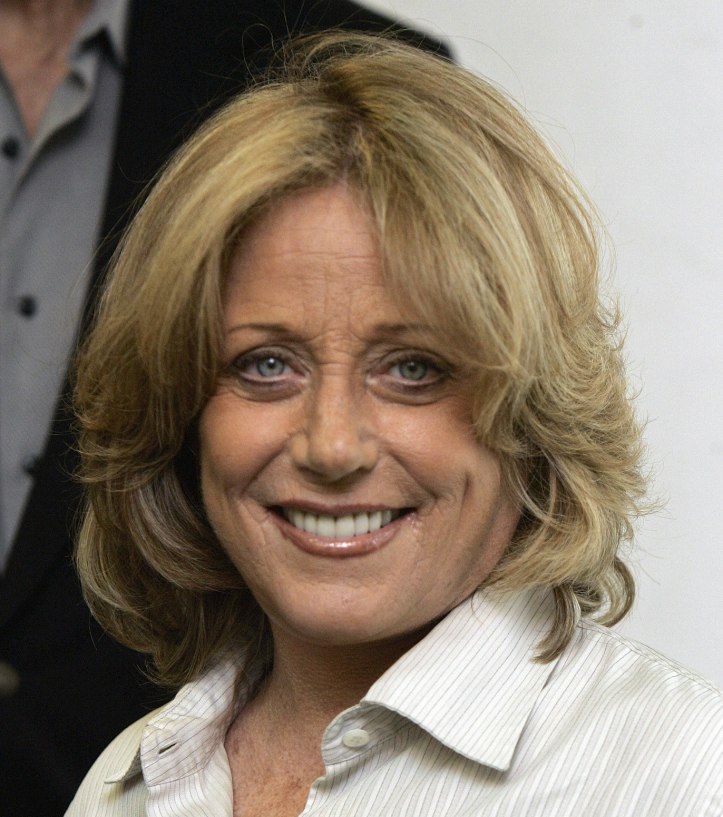 Lesley Gore released her last album in that same year. It was called Ever Since and featured a re-recording of “You Don’t Own Me”. She had begun work on a memoir and a Broadway show when she succumbed to lung cancer in February of 2015.

I wrote poetry in high school and one poem that tried to pay homage to “the old days” started “In the days of yore / with Lesley Gore…”. I’ve always liked Lesley not only for her music but because I thought she was unique. Far from being a one-hit wonder, she had many hits right out of the gate and over a period of a few years. And she had a great sound; innocent yet sophisticated. I have found that that may be a fair description of the lady, as well. Educated and down-to-earth, she seems to have stayed grounded and true to herself. While she – unlike many of her contemporaries – survived her heyday and even enjoyed a victory lap, it’s still a shame that she’s no longer with us. She left us a lot of great music and for that we are grateful.

Postscript: I’ve noted in this article that the last name “Gore” was Lesley’s mother’s maiden name. Upon publishing, I was contacted by the Lesley Gore International Fan Club and told that was not so. They inquired as to my sources so I dug a little deeper. Turns out that it cannot be confirmed where the “Gore” name came from. It is regularly noted that Lesley’s parents were “Leo Goldstein” and “Ronny Gore”. My assumption, therefore, was that “Gore” was Ronny’s name. I also assumed that it was Lesley that took on her mother’s name and not vice versa. Confusion deepened when I read an article on Leo’s business career and he was referred to as “Leo Gore”. Remember that Lesley’s brother also used the name. I found a listing for a “Ronny Gore” who is 96 years old and lives in Palm Beach Gardens, FLA. “Gore” may not be Ronny’s maiden name but it is likely a name from her family.

Elvis People don't need a movie about Elvis.
Last year I met Edie Sedgwick.
Now Wearing
Jim Garner throwing weekend vibes.
Fresh up on the website and new this week on the Cocktail Nation radio show podcast, we're looking at a fascinating book on mid-century advertising. Read the review at my site - link in bio - and listen up to the Home of All Things Lounge, Tiki and Swank - @cocktailnation. Dedicated to my good buddy @vintageadvertising1
Throwback to my days as a young, idealistic, seersucker-clad lawyer at a small but prestigious firm in Raleigh. One day looking through old files, I stumbled on a secret from the firm’s past that would alter my future. It would shake my faith in the law…and men’s fashion. 😉