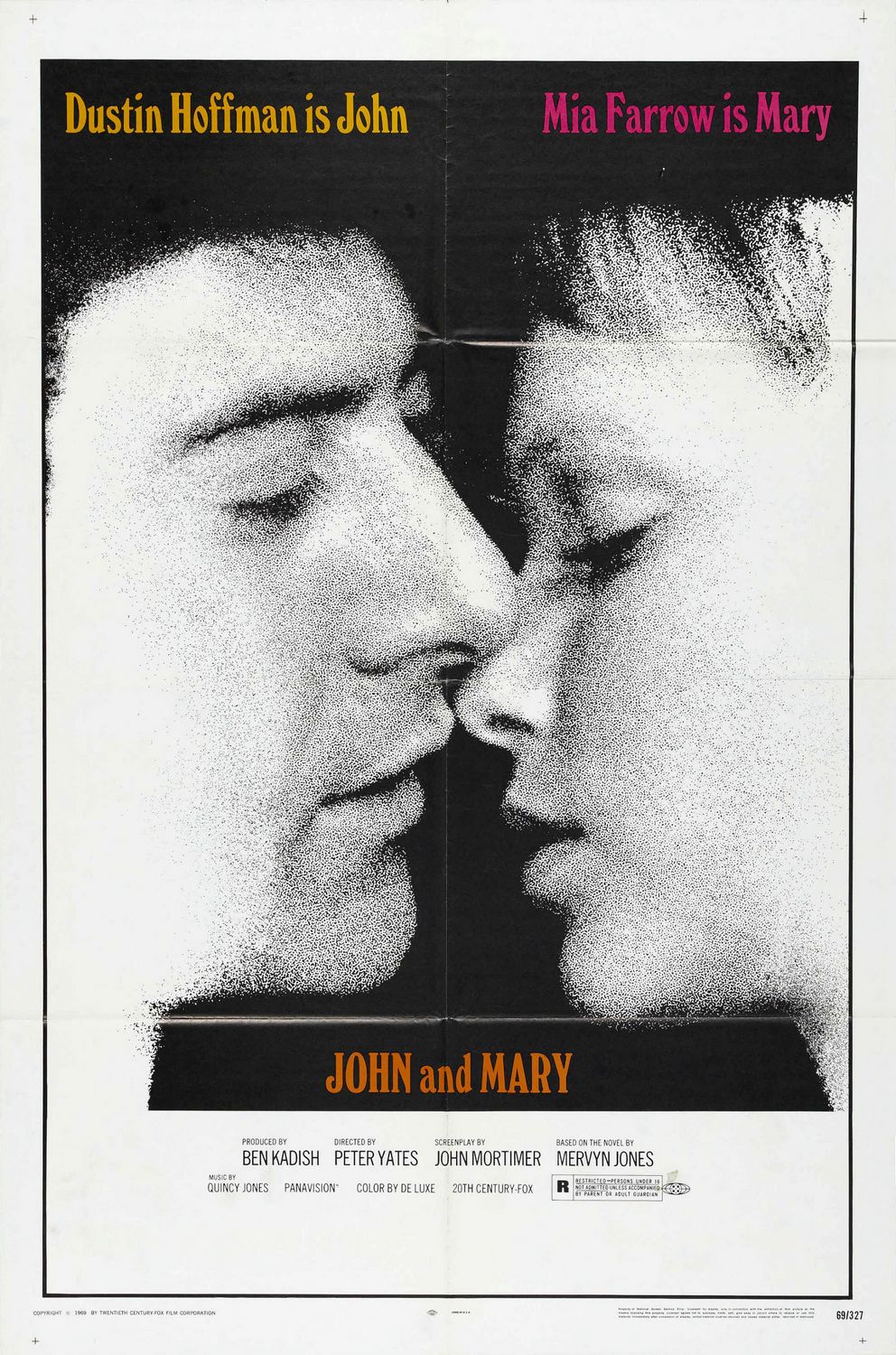 It’s early morning. The dawn’s grey light creeps in the window. Mary (Farrow) stirs and opens her eyes. She looks over her shoulder and hears John’s (Hoffman) breathing as he sleeps. As she silently rises and explores her surroundings, John awakes. Mary picks up her clothes, discarded hastily last night. Like pieces on a chess board, each moves about the apartment, neither yet ready to engage the other.

In a flashback to the night before, John is in a singles bar, tentatively looking for someone to meet. He comes upon a table where Mary is talking with her friends and he ingratiates himself. Mary’s friends leave and she stays behind with John. The two hit it off and go back to John’s apartment.

The next morning, John and Mary realize they don’t know much about each other. It’s a delicate game they play, feeling their way with one another. Some things they find they like about each other, some things they are not sure of. Some things cause them to think about past loves and we see scenes of these old encounters. As the rain comes and the afternoon turns to evening, we see them come to a place of discernment as they contemplate any future they may have together.

I love it when this happens. I stumble on a movie, one I don’t really anticipate liking even, and it absolutely captivates me. Quentin Tarantino’s 9th film, Once Upon a Time in…Hollywood, celebrates the year 1969. This got me looking into the films that were released that year, 50 years ago. This is one of the better ones I’ve discovered. John and Mary was significant when it was released as it was the follow-up film to three notable releases. English director Peter Yates had apprenticed on films with the likes of Canadian Mark Robson and Guy Hamilton and had directed on English television (The Saint). His first feature was the Cliff Richard vehicle Summer Holiday (1963) and then he moved to America and in 1968 helmed Steve McQueen’s iconic Bullitt. John and Mary directly followed. He continued to direct into the 1990’s but never put his stamp on the industry, Stateside or in his home country.

Two of the first four movies Dustin Hoffman made are landmark, historic films, both being nominated for Best Picture and both earning Hoffman a Best Actor nomination. The Graduate in 1967 was followed by Midnight Cowboy, released in May of ’69. The latter won the Oscar for Best Picture and garnered Hoffman the second of his seven Best Actor noms – he would eventually win twice, for Kramer vs. Kramer in 1980 and for Rain Man in 1989. So, going into John and Mary, Dustin Hoffman was definitely a rising young star. His subtle, nuanced performance in John and Mary did much to display his range and he found himself at the vanguard of a new kind of leading man. After our film came Straw Dogs and Papillon and many other great films. Incidentally, Hoffman followed Ishtar – a film considered to be one of the worst ever made – with Rain Man, the highest-grossing film of 1988 and winner of the Best Picture Oscar.

Mia Farrow is the daughter of film director John Farrow (Five Came Back, The Saint Strikes Back) and gorgeous Maureen O’Sullivan (Jane in six Tarzan films, The Thin Man and she played Mia’s mother in Hannah and Her Sisters in 1986). Mia got her big break on television in 1964 on the prime time soap Peyton Place. When Mia married Frank Sinatra in 1966, he encouraged her to leave the show. She did and soon landed her career-defining role in Roman Polanski’s Rosemary’s Baby. This film is still heralded as one of the best horror movies of all-time and her performance received raves. John and Mary then was tapped to be her next film in a run of triumphs but that really didn’t pan out for Mia. Her and Frank divorced and she married late film composer André Previn. Her career rose from some doldrums in the ’80’s and ’90’s as she began to receive praise and Golden Globe nominations for her work in the critically-acclaimed films made by her long-time partner, Woody Allen.

The score for John and Mary is by Quincy Jones. Earlier this year when I wrote about Lesley Gore, I was taught a lesson about Quincy. My knowledge of him as I grew up was of his work in what could be called “black music”. He is renowned for producing Michael Jackson’s Thriller album – the biggest-selling record of all-time – and his theme for the TV show Sanford and Son – “The Streetbeater” – is my third-favourite song ever. However, Lesley Gore’s music – and John and Mary, for that matter – seem really “white” to me but I learned that these classifications often go out the window. This is especially the case with Quincy Delight Jones, Jr.

By the time he scored our film, Q was already well on his way to the legend status he enjoys today (still alive as of this writing, aged 86). He had already made his name in popular music with Gore, Sinatra and others and had already been nominated for Grammys and Oscars for his film composing. By 1969, his music had been heard on the big screen in The Pawnbroker, Walk, Don’t Run and In the Heat of the Night. In 1969 alone he scored Mackenna’s Gold, The Italian Job, The Lost Man, Bob & Carol & Ted & Alice, Cactus Flower and John and Mary. Dig this: from 1970 through ’72, Q scored a total of 10 films! 16 film scores in four years. An artist with few peers, Quincy Jones has gone on to become one of the most honoured and acclaimed people in the industry.

And here’s a head-scratcher: there is a song on the soundtrack called “Lost in Space” by one Jeff Bridges. I looked it up and sure enough, the song is by that Jeff Bridges. Now, I knew he was a musician of sorts, Crazy Heart and all, but here’s the thing that threw me; what on earth is a song of his doing on this soundtrack? From 1969?!

What intrigued me most about John and Mary was the dynamic between the two principals. As a romantic, I love films that portray relationships and the sometimes difficult interactions between two people. This film offers an interesting perspective; once the fleeting heat of passion is spent, can two strangers still relate to each other?

“The Morning After” is – as most of you know – different from “The Night Before”. There is great acting and direction in the film as John and Mary – without, at first, acknowledging each other – move around John’s interesting, industrial-looking loft-type apartment and look for clues as to what the other is really like. Waif-like Mia – who reminds me a lot of her mother when she speaks – as Mary investigates John’s things, trying to get a read. She sees a picture – somewhat buried on a cork board – of a girl. We later find that this is an ex of John’s, Ruth, played by the gorgeous Sunny Griffin, who was not an actress at all but a model, popular at the time for her appearances in TV commercials for Tab, the diet cola.

John is bold enough to poke in Mary’s purse where he sees a picture of an older man in glasses. This, we see through flashbacks, is James. James is a married politician with two kids with whom Mary is having an affair. James is played by Michael Tolan, a minor league actor who had acted with Dustin Hoffman on the stage. What’s interesting about James is that, by the time the flashbacks – and the film – end, you realize that we have not seen Mary break up with James and that the two of them are still engaged in their affair when Mary meets John.

There is fine acting on display here. Hoffman and Farrow do very well playing off each other and displaying the discomfort that would be apparent in this situation. “Sleep well?” John asks. I mean, what would you talk about in such a situation? Eventually, John makes breakfast for Mary and goes on talking about organic eggs, revealing himself to be something of a health nut. It’s Mary of the two characters who seems to be the more carefree. When John says that she left her clothes on the floor, Mary replies with a smirk “that’s where I keep most of my things”. She looks at him askance as he goes on about the poisons inherent in food and shrugs, saying she’d buy “plastic eggs laid by a computer”. Later, John plays some records for Mary, raving about his love for brass band music! Mary gives him a similar look to the one I would give him.

Although the two are stumbling their way along, the day seems to be going alright until later in the afternoon when the two are reclining on the bed. Although Mary is obviously drowsy and looks to be ready for a nap, John starts to make a play for her. I was dumbfounded at John’s poor reading of the situation and couldn’t believe that he thought it was a good time to attempt intimacy. After all, they had made some progress with each other. Just like a guy.

But here is a pivot point of sorts in their relationship. John, realizing she has dozed off, zips back up the zipper he had been working on and watches her sleep. Mary sleeps for quite some time. John wanders the apartment waiting for her to awake. When she does, they lay with each other on the bed. Suddenly, Mary says she has to call her roommate, Hillary (Cagney & Lacey‘s Tyne Daly in her big screen debut) and something changes. John at first seems to resent the fact that Mary has other people in her life. But the hard truth is something that bothered me – John was once more hoping they were going to make love again when I could clearly see that was not going to happen. And I was sitting way over here. I was thinking that if this is where John’s head is at then I’m disappointed in him. Let’s face it, though; in a situation like this, the guy would likely be more ready to jump back in bed than the girl would be and if they didn’t, the guy could begrudge this and act out accordingly.

John becomes belligerent. “I think you better go”, he tells Mary, to my surprise and to hers. She’s disheartened but tough about it – I like her. Mary leaves and, after much thought and a weird sort of dream sequence in which John is reprimanded by Ruth, John has a change of heart.

John and Mary is about sex, in a way, but what struck me as I watched is that it’s not sexy or titillating or decadent. Neither Hoffman nor Farrow are “sexy” so the sex part is muted, grounded. There is no real heat here; the film is certainly not gratuitous or depraved. Instead, it’s a penetrating look at an interesting situation and the way these two people navigate their way. It’s a profound study and I think you’ll find yourself deeply invested in these two people, as I did.