In Part 1 of this series, we looked at the plot of American Graffiti and discussed the remarkable cast, almost all of whom were unknown and then went on to notable careers. Here in Part 2 we’ll break down the origin story of this landmark film and the team that brought Lucas’ vision to life.

In 1971, George Lucas was a young film school grad with one movie – THX 1138 – under his belt. The story he wanted to tell now, though, was his own. As a kid growing up in Modesto, Lucas had been a gear head – a car fanatic – and now, as an adult, Lucas was interested in telling a uniquely American story. He wanted to document the cruising culture so prevalent in the US in the 1950’s and into the 1960’s. I’ve always maintained that June 20, 1963 is the moment America began to pivot and Lucas seems to agree. With the coming of the British Invasion, the escalation of the Vietnam war and the rise of hippie culture, the way teenagers spent their leisure time began to change and the culture of the country began to shift. Lucas wanted to document the society of youth that had been lost at this pivot point and it is this that lends American Graffiti it’s poignancy and it’s universal appeal.

THX-1138 is a cold, futuristic film set in a time when happiness and individuality have basically been outlawed. Francis Ford Coppola had produced that film and he and Lucas were friends and colleagues and had been for some time. For Lucas’ second film, Coppola encouraged him to write something warm that might appeal to the masses. Lucas wrote an outline of the story he wanted to tell and farmed the writing out to a screenwriter who returned a script that was the opposite of what George was going for; the tale had been turned into a “hot rods from hell” horror show featuring explosions and death and George had no use for it. But the screenwriter had been paid and now Lucas had no money and no script.

So George got out his 45s and wrote the script he called American Graffiti. He literally built scenes around the various songs that ended up in the film. From the very inception of this story, then, the music of the era was woven into the fabric of the tale. This approach and it’s results would prove historic. For help in fleshing out the script, Lucas brought in the husband and wife team of Willard Huyck and Gloria Katz. Huyck and Katz both have careers that are exclusively tied to George Lucas; they served as script doctors on Lucas’ next film, Star Wars, and wrote the Lucas films Indiana Jones and the Temple of Doom, Howard the Duck and Radioland Murders.

To lend a “name” to his sophomore project in an effort to secure funding from a studio, Coppola, who’s stock in Hollywood was on the rise as word of his work on the as-yet-unreleased The Godfather had the industry abuzz, once again came on board as producer. Coppola and Lucas worked together on many aspects of the film. Both filmmakers were of the “new breed” and were ushering in a new era of maverick movie making. On the subject of casting, both men were intent on using a group of newcomers that would work well in an ensemble. After much effort assembling actors and having them work in various groups ad-libbing and fleshing out the characters, the cast was chosen (see Part 1).

Looking back through the years, it is incredible to think that Lucas could not find a studio to finance his film. Virtually every studio turned him down; even my beloved American International Pictures passed because the proposed film wasn’t violent or sexual enough for their standards. Finally, Universal agreed to bankroll the project. Lucas received artistic control in exchange for a promise to work on a tight budget. Paramount set the budget at – wait for it – $600,000; an additional $175,000 was given when Coppola signed on as producer. Remember that; the budget was $775,000. The strict monetary restraint was felt throughout the making of the film. When the actors asked for chairs to sit on between scenes, they were told that chairs were not in the budget. They sat on the curb. 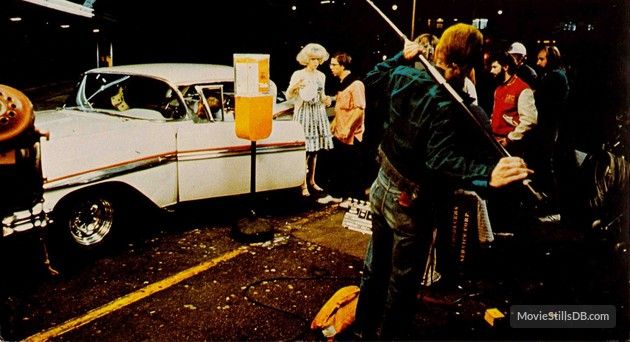 There is much to discuss about the “look” of American Graffiti; but I’m not the guy to do it. All I can tell you is that Lucas wanted the film to have a documentary look to it. Discussing the difference between “director of photography” and “cinematographer” and the science behind CinemaScope, Techniscope, 35mm, 16mm is not something I’m able to do. We should mention, though, that Lucas brought in Haskell Wexler as “visual consultant”. A war hero who helped George Lucas get into USC’s film school, Wexler had an impressive run as a director of photography in the late 1960’s, working on Who’s Afraid of Virginia Woolf? – for which he won an Oscar – In the Heat of the Night and The Thomas Crown Affair. Lucas brought Wexler in to help him get the look he wanted. Haskell was filming commercials all day in San Francisco and would fly down to Petaluma to work with Lucas all night. Wexler would go on to serve as DP on One Flew Over the Cuckoo’s Nest, Colors and Mulholland Falls. He was nominated for an Academy Award four more times winning once more for 1976’s Bound for Glory. Haskell Wexler is also noted for writing, producing, directing and serving as DP for the 1969 film Medium Cool, a film that was called one of the greatest of that year.

Lucas was insistent on having his film be loaded with the music he enjoyed as a youth. After all, the Wolfman and the radio were going to be major themes of the movie so the music of the era had to be authentically represented. $90,000 was spent procuring the rights to the songs which left no money for incidental music. However, George would never have made American Graffiti without wall-to-wall music and it became one of the first films to feature a soundtrack loaded with “oldies”. Incidentally, music licensing was not then the major industry it is now. Lucas has said that, for an expenditure only slightly higher than the $90,000 spent to get the rights to use the 42 songs heard in the film, the filmmakers could have bought the songs outright, giving them a valuable catalogue. The studio, though, would not allow the extra expense.

George Lucas was happy with his script. He enjoyed the comfort of working again with his close friend, Francis. He had the cast he wanted, he had his hero/mentor, Haskell, by his side and he was filming a personal story in the “lean and mean” style that he and his colleagues favoured. He oversaw much of the editing himself and was thrilled with his final cut of the film. But when he showed it to the studio execs at Universal, they hated it.

Next up in Part 3, we take a look at just how this little movie fared when it finally made it to theatres.

Fresh up on the site is a real labour of love. My man, Steve Winwood, has charted a rare course through the music business. From teenaged hit maker to 70s prog rocker. From pop star to living legend. It’s a unique tale and one worth telling. And reading. Take a look. Link in bio. #stevewinwood #spencerdavisgroup #traffic #oldies #rockmusic #progrock #popstar #legend #60s #60smusic #70srock #80smusic #blogger
Myrna Loy, 1930. #myrnaloy #30s #30sstyle #halloweencostume #halloween #spookyseason #spooky
James Brown recorded his legendary Live at the Apollo album on October 24, 1962. It was released in May of '63 and has gone on to be considered one of the greatest albums ever released. #otd #onthisday #music #musichistory #jamesbrown #soulmusic #livealbum #rhythmandblues #apollotheater
This week on the latest radio show podcast from Koop Kooper’s Cocktail Nation, I bring the Canadian content. On my Words With Wellsy segment, I talk about a book near and dear to my heart from a distinguished man of Canadian letters, the late Mordecai Richler. Listen now @cocktailnation and read the full review at my site. Link in bio, look under “books”. 🇨🇦📚🍂🍁 #bookstagram #book #bookrecommendations #booklover #canadian #quebec #montreal #jewish #autumn
My latest gamble buying something off Facebook has paid off. It’s the Retro 60s Gradient Polo Cardigan from AshFans.com. Swell! #fashion #retrofashion #vintagefashion #60sstyle #vintageleisure
Jimi Hendrix surrounded by Eric Burdon, John Mayall, Steve Winwood and Carl Wayne. Zurich, 1968. #jimihendrix #stevewinwood #ericburdon #johnmayall #rock #rockhistory #rockphotography #musician #legends #60s #60smusic #zurich