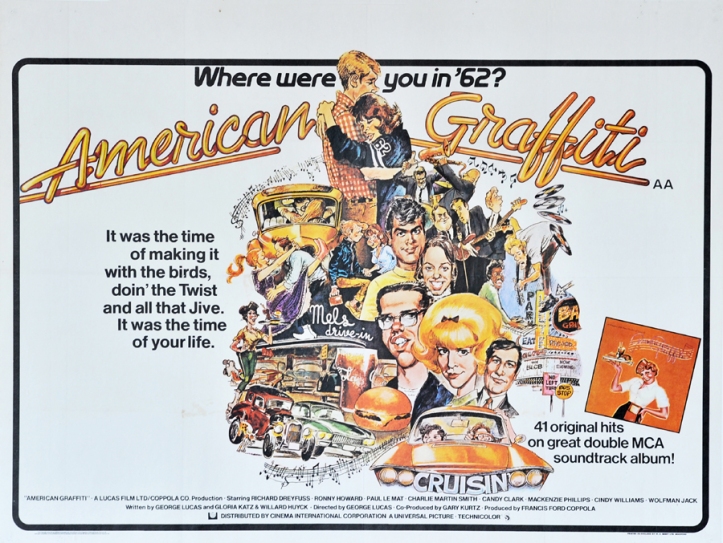 Lucas thought the hard part – getting American Graffiti made – was over. Turns out the most difficult task lay ahead; getting Universal to release it.

The preview was over. The studio exec had his hands in his pockets. He walked up to the producer and director slowly, looking at the floor. When he raised his head, his solemn look was ominous. “Well”, he said quietly, “we’ve got a lot of work do”.

Francis Ford Coppola made Apocalypse Now and The Godfather trilogy, yes. And Rumble Fish. And The Outsiders. But his most heroic action in film history may have been when he incredulously confronted the Universal executives that were so dismayed when they had finished watching George Lucas’ finished cut of American Graffiti. Word of mouth around the studio was that George’s new film was wonderful. But after the screening, Universal was not happy. They were considering shelving the movie or releasing it to television. George was disconsolate. Francis was livid.

“You should get down on your knees and thank this man for what he has done for your career”, Coppola firmly told the execs. Then he put his money where his mouth was. Francis offered to buy the film from Universal and release it himself. Universal balked at this and held Coppola and Lucas off for awhile while they considered their options. Then, in March of ’73, Coppola’s The Godfather won the Oscar for Best Picture and Francis was suddenly a major player in town. The studio relented and Universal released American Graffiti to theatres on August 11, 1973. As the months went by, Francis Ford Coppola was kicking himself for not buying the film from the studio.

Along with Easy Rider (1969), American Graffiti is considered the original “sleeper hit”. Audiences were eating it up and the critics were raving. All the major film critics of the day – save Pauline Kael – loved the film: “not only a great movie but a brilliant work of historical fiction…”; “well-made, does achieve moments of genuine emotion”; “such a funny, accurate movie, so controlled and efficient in its narrative…”; “told with outstanding empathy and compassion through an exceptionally talented cast of unknown actors”; “masterfully executed and profoundly affecting movie”; “few films have shown quite so well the eagerness, the sadness, the ambitions and small defeats of a generation of young Americans”.

Of course now Universal got behind the film, investing $500,000 in it’s promotion – remember what the film was made for? American Graffiti soon generated a worldwide box office of $55 million – or $325 million in today’s dollars. Then in 1977, George Lucas released Star Wars and he became a prominent figure. Universal had insisted that three scenes be cut from American Graffiti before it was released; Steve dressing down Mr. Kroot at the hop, Toad battling a used car salesman and Falfa crooning “Some Enchanted Evening”. Now that he could, Lucas insisted those scenes be restored and they were. Universal promptly re-released the film in 1978, earning an additional $63 million bringing the total of the two releases to $118 million – or $697 million in today’s money. In 1977, it was the 13th-highest-grossing film of all-time and is currently – adjusted for inflation – the 43rd highest-grossing film of all-time. You know how many movies have been made in history? Only 42 of them have made more money than American Graffiti. Remember how much it was made for? $775,000. It has one of the greatest cost-to-profit ratios in film history.

American Graffiti was nominated for 5 Academy Awards; Best Picture, Best Actress in a Supporting Role (Candy Clark), Best Writing and Best Film Editing. It was nominated for 4 Golden Globes, winning one for Most Promising Newcomer – Male for Paul LeMat; there were also noms for Best Actor for Richard Dreyfuss, Best Director and Best Motion Picture. It was also nominated for 10 other major awards, including two for Cindy Williams, actually. It is also part of the Guinness Book of World Records as a part of George Lucas’ having the Highest Box Office Film Gross for a Director (male) in history.

The soundtrack album is really a cultural phenomenon that deserves deeper study. Released in August of ’73, the album hit #10 on the Billboard 200 albums chart. The songs appear on the record – 2 LPs, 1 CD – in the same order they are played in the film. The record and the movie start with Bill Haley and the Comets doing “(We’re Gonna) Rock Around the Clock” and this marks the second time this immortal tune had been used over the credits of a movie. The song originally took off when it was used in 1955’s The Blackboard Jungle starring Canadian Glenn Ford. It’s use in American Graffiti further cemented it’s status in the rock ‘n’ roll pantheon. The soundtrack is a repository of some of the most iconic songs of the era; “Runaway”, “Why Do Fools Fall in Love”, “The Stroll”, “Smoke Gets in Your Eyes”, “Heart and Soul” and others. On it you can also find lesser known songs like Chuck Berry’s “Almost Grown” and “To the Aisle” by the Five Satins.

The soundtrack spawned three “sequel” records, each loaded with classic rock ‘n’ roll and this started a cottage industry of compilations that mined the golden era. George Lucas almost single-handedly reignited a love affair with this music and started a wave of nostalgia across the United States. Immediately in Graffiti‘s wake you saw the ’50’s on television with Happy Days and Laverne and Shirley and the ’50’s in the theatres with Grease. A lot of this can be traced back to Lucas and American Graffiti.

And films with wall-to-wall music? Filmmakers like Martin Scorsese used this method in Casino and Quentin Tarantino employed much golden era music and the voices of the DJ’s that played it on the radio in Once Upon a Time in…Hollywood.

Part 4 wraps things up with a look at the glorious intangibles of this film and the swath it still cuts across the internet.

Sported a couple of true vintage items today. The Mark Fore & Strike sport coat I found thrifting in Latrobe. There is some great history on this company, once known as “the tropical Abercrombie & Fitch”. The cravat or ascot says it’s from Burlington Arcade in London. This shopping complex still exists and was founded in 1819 “for the sale of jewelry and fancy articles of fashionable demand, for the gratification of the public”. I am very gratified, thanks. The “WI” threw me a curve and had me searching the West Indies for info. Still not sure to what it refers. #vintage #vintagestyle #vintageclothing #vintageleisure #churchclothes #church #www2c #fashion #style #mensfashion #mensstyle #menswear @burlingtonarcade
My latest article is a book review of an intriguing Hollywood autobiography. Samuel Z. Arkoff started American-International Pictures with his friend and partner James H. Nicholson at a time when television was threatening the movie business. But AIP was able to carve out a corner of the industry by providing young people with monsters, beach parties, bikers, hippies, Poe horrors, two-headed transplants, etc., etc.... Read it now. Link in bio. #blogger #bloggerstyle #blog #bloggersofinstagram #blogpost #bloggerlife #bookstagram #book #booklover #booknerd #bookcommunity #bookrecommendations #bookreview
Spring has sprung. Croft & Barrow jacket from @kohls with one of my French cuff shirts and a vintage tie I call Meringue. It’s from the Wemlon by Wembley collection, made of Wemlon polyester, in use from 1962 to 1979. The tie is held nicely in place by my tie magnet from @tiemags And my old golf shoes. Indoor photos today; it’s pouring rain. #kohlsfinds #spring #springisintheair #springfashion #springvibes #mensfashion #mensstyle #menswear #churchclothes #church #www2c #homemadefashion #vintagefashion #beyourself
Tonight on Miami Vice it’s episode 4.6: God’s Work. Original airdate November 6, 1987. Rosanna DeSoto and @esai_morales play mother and son; just as they had five months earlier in La Bamba. This episode also features Anthony Quinn’s son, Francesco. 📺🌴 #miami #miamivice #esaimorales #80s #80svintage #80stv #classictv #tv #television #classic #vintageleisure
Happy Easter. Debuting this vintage pocket square sent to me by a follower and dear friend. #easter #easter2021 #easterweekend #eastersunday #heisrisen #resurrectionsunday #church #churchclothes #www2c #vintage #hat #strawboater #mensfashion #mensstyle
This month's look at the oldies takes in the amazing Berry Gordy and the origins of his Motown empire.