Check This Out: “Jesus Was a Capricorn”

JESUS WAS A CAPRICORN (VINYL LP) 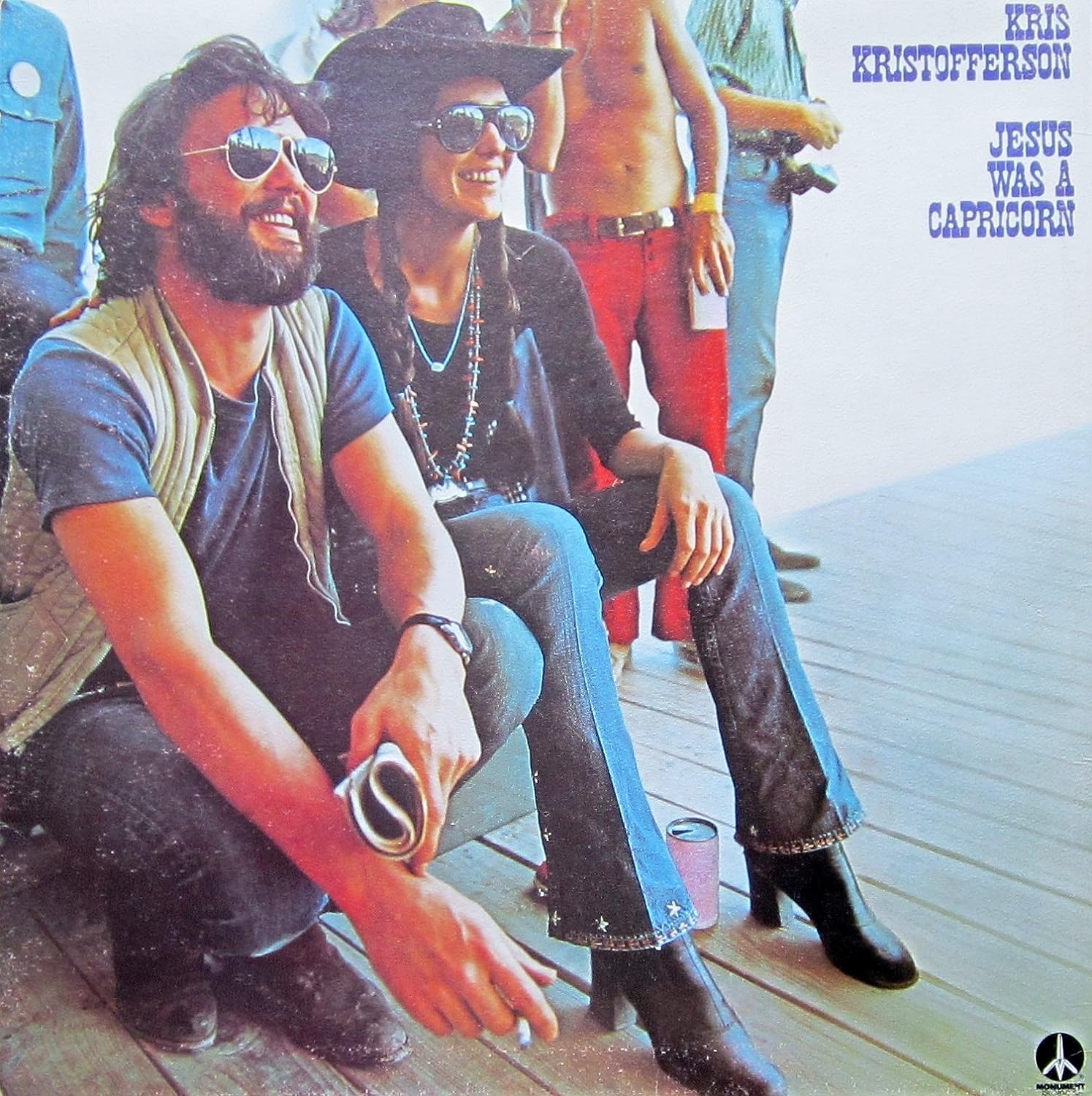 The summer of 2019 saw me buy many records. Too many. One artist I was looking for was Kris Kristofferson. He had fascinated me for awhile and I was thinking that he would be someone I would like. When I found this album and The Silver-Tongued Devil and I, I snatched them up.

Let’s get this out of the way; with this album, my initial concern was the possibility of irreverence in the lyrics of the title track. Although what I know about Kristofferson would suggest this would not be the case, I was wary. I understand now what Kris was going for in the lyric.

“Jesus was a Capricorn
He ate organic food
He believed in love and peace
And never wore no shoes
Long hair, beard and sandals
And a funky bunch of friends
Reckon we’d just nail him up
If he came down again
‘Cause everybody’s gotta have somebody to look down on”

Kris is using Jesus as an example of society’s habit of persecuting others. Perhaps no one in history was more unjustly punished than Jesus and, in the song, Kris goes on to reference “eggheads”, “rednecks”, “hippies”, “straights”, “freaks”, “squares”, “blacks” and “whites” and laments how one group unfairly hassles another. Those who “know” Kristofferson know that he has an understanding of faith – as we’ll see later on – and so we can confidently comprehend his motives with these lyrics. For me, it’s unfortunate that Kris connects the Son of God with the signs of the zodiac but that’s just my personal opinion based on my beliefs. Anyways…….

By the time this album was released in 1972, Kris Kristofferson was an immensely successful songwriter. His songs – “Sunday Mornin’ Comin’ Down”, “Me and Bobby McGee”, “For the Good Times”, “Help Me Make it Through the Night” among them – were recorded by the likes of Ray Stevens, Jerry Lee Lewis, Roger Miller, Ray Price, Waylon Jennings, Johnny Cash, Janis Joplin (who dated Kris for a time), O.C. Smith, Patti Page, Kenny Rogers and the First Edition and others.

“During this period it was commonplace to find at least one Kristofferson cut on an album released by a country artist; Waylon Jennings included no fewer than four of his songs on his 1971 LP The Taker/Tulsa. Kristofferson was held with a kind of reverence by his fellow country singers and songwriters that rivaled Bob Dylan in the mid-sixties…Kristofferson could ‘tell a story in one line that most of us can in five’…Willie Nelson called Kristofferson ‘one of the best songwriters of all time. He shows more soul blowing his nose than the ordinary person does at his honeymoon dance’.”

He had released three albums loaded with songs others had had hits with and Kris was beginning to enjoy a measure of success as a performer in his own right. Jesus Was a Capricorn was, at the time, thought to be somewhat of a departure for Kristofferson, critics complaining it was overproduced and was cleaner and slicker than his previous, working-class man-of-the-streets albums. It didn’t help that the first two singles from the record underperformed. It was the third single, though, that provided the breakthrough.

“Why Me” – or “Why Me, Lord” – was the last song on the album. Kristofferson wrote this as a song of gratitude, a depiction of a time when a person takes stock of the life they’ve lived and found themselves ashamed of the choices they’ve made. Despite these mistakes, he realizes in a head-shaking revelation that God has still been present and that He has still bestowed blessings, no matter how undeserved:

“Why me Lord, what have I ever done
To deserve even one
Of the pleasures I’ve known
Tell me Lord, what did I ever do
That was worth loving you
Or the kindness you’ve shown”

The singer then acknowledges his helplessness and his need for the Lord’s direction. It is an impassioned plea:

While the song may have seemed out of character for the rough-living Kristofferson, it showed his awareness of the possible consequences of his lifestyle and his willingness to call out to God in penitence and with a plea for help. It’s about humility and surrender. The fact that Kris Kristofferson wrote and recorded such a song grounds him; sure, I live a ‘rock ‘n’ roll’ life. But I’m not so far gone that I’ve forgotten my Creator. The lyric depicts the forgiveness and comfort available to all. It is a valid sentiment as presented here.

The song became the biggest hit of Kristofferson’s career. It became an immediate country gospel standard, helped in no small measure by Elvis Presley’s adopting it as a staple of his live shows, featuring J.D. Sumner. It was also recorded by George Jones, Conway Twitty, Willie Nelson and countless gospel artists.

Another highlight from the album is “Help Me”, a song written by Larry Gatlin, who joins Kris in a duet. It is another song with a theme of faith (“Come down from Your golden throne to me, to lowly me, I need to feel the touch of Your tender hand”) that was recorded by Elvis Presley. “Help Me” was a song Kris heard Gatlin do at a church service he attended. Kris has said it was at a low point in his life when he was riddled with guilt. The song served as a release and “really shook me up”. There is another notable track on the record. Frank Sinatra chose only 9 songs for his comeback album, Ol’ Blue Eyes is Back, and one of them was “Nobody Wins” from Jesus Was a Capricorn.

What really struck me about this album was the crack band Kris used. Joining him on vocals – and on the front cover – was his soon-to-be-wife Rita Coolidge, possessor of one of the coolest female names in music. I think perhaps she has dated more singers than another other female artist in history; she dated Stephen Stills but left him for Graham Nash, precipitating the demise of Crosby, Stills and Nash. She was involved with Leon Russell, Joe Cocker and drummer Jim Gordon. She was married to Kris for seven years and they have one daughter. Rita had two Top Ten hits in 1977 but is perhaps best known for her theme to the James Bond movie, Octopussy, “All Time High”.

The band on this record is full of major session players, most with connections to Elvis Presley. Guitarist Chip Young played with basically every notable country artist there was in a 25-year career. Dennis Linde wrote countless country songs and “Burning Love”; he also played guitar on that song, one of the two most iconic Elvis Presley tunes and the King’s last Top Ten hit. In 1965, bassist Norbert Putnam was brought from Muscle Shoals to Nashville specifically to play for Presley, who name-checks him on “Merry Christmas, Baby”; “Wake up, Putt”. He would go on to be a innovative producer in Music City. Also on bass is Tommy Cogbill, another legendary session man who was part of “the Memphis Boys”, the house band at American Sound Studios and played on records by Aretha Franklin and Wilson Pickett.

Late keyboardist of the Memphis Boys, Bobby Emmons, played with Presley in ’69 and on many hits by others. David Briggs is one of my favourite session players. The pianist from Alabama has had a long career, starting session work at 14 and ending up being featured in an exhibit in the Country Music Hall of Fame. When veteran keyboardist Floyd Cramer was running late for a session with Presley in ’66, Briggs was asked to fill in and stayed with King until February of ’77. Part of “the Nashville Cats” team of session players, Briggs would eventually open a studio with Norbert Putnam. Listen to his piano playing with Presley on “Way Down”, his wonderful left hand on “Blue Eyes Crying in the Rain” and his stellar clavinet work on stage and on the Today album from ’75. Pianist Michael Utley is here a year before he would begin working with Jimmy Buffett, with whom he has stayed ever since. Listen for Jimmy’s “Mr. Utley” before Mike’s solo on the track “Volcano”.

The way I see it, you should own at least two of Kris Kristofferson’s first four albums, preferably on vinyl. Jesus Was a Capricorn, from my birth year of ’72, is a great place to start.

“I’m gonna tell you how I feel, straight-up genuine and real
Open a bottle of ninety-proof and write a song for you
Like Kristofferson would do”

The other day, somebody asked me what's new. I started to explain and actually got a little choked up.
I don't know when I've ever been more moved by a film. A week ago, I had never seen it. Today, I don't want to watch any other movie. Here we discuss this gentlest of films directed with the lightest of touches by Clint Eastwood. Link in bio.
“From the age of three, Lisa had listened to records in her room instead of playing with other children. But in Tennessee, she had a whole other life. She could eat anything she wanted, squish frogs, spook the security guards at 4 A.M, sign rude autographs at the gate ("F*** you, Lisa Marie Presley”), and race around the grounds in her own golf cart, sometimes with playmates Patsy and Peggy Lynn, the twin daughters of country singer Loretta Lynn, who had met Elvis when they were both in the hospital in Memphis.”
If you're like me - and if you are, I'd be concerned - you're partying like it's 1973.
In a new series launching this year, Vintage Leisure spotlights the many American actors who prolonged their careers by working internationally. Some came back very much in demand and forged successful second acts in Hollywood, others made their homes in Europe where they stayed and became major stars. Some were just cashing in.
Now Digging