STATUS: village in the Czech Republic 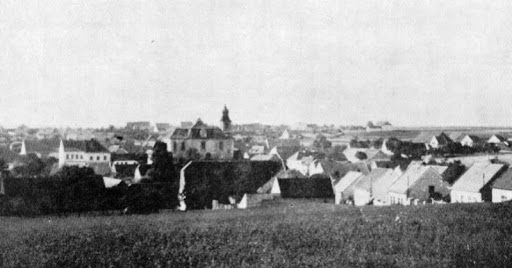 If you love classic film, you love Casablanca. Frankly, I am very suspicious of classic film lovers who say they don’t care for it. And I fear that students of modern film have forgotten Casablanca or, at best, know it but don’t fully appreciate its value.

Casablanca I first owned on VHS, a 1992 50th anniversary edition. The cover opened up like a book and it contained a little doc as well hosted by Lauren Bacall. I also had a poster featuring this art that was up in my bedroom. Casablanca was also the first of three movies that made me cry, the other two being A Place in the Sun (1951) and It’s a Wonderful Life (1946). The film is basically perfect, if any film can claim to be and the only things that have ever irked me about the film is Dooley Wilson’s flailing elbows as he “plays” the piano and the fact that I never met Yvonne. 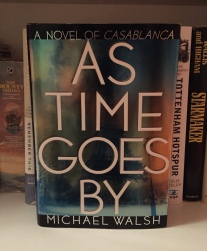 Years later I was in a thrift shop with my wife and came across a book by Michael Walsh called As Time Goes By and on the cover it said it was “a novel of Casablanca“. I was skeptical at first but thought it would be fascinating to read what someone would create as the continuing story of the events of the classic film so I bought it and read it. It proved fascinating. Rick, it seems, had been a Jewish hood in New York City during prohibition and had to lam it to North Africa after a disastrous gang war.

What really struck me, though, was what the author had the participants getting up to after Rick puts Ilsa and Victor on the plane. Working with the Czech Resistance in Prague, it is Victor Laszlo – with the help of Ilsa and Rick – who carries out Operation Anthropoid, the assassination of Reinhard Heydrich, “the Butcher of Prague”. This had me fascinated and I quickly went to the internet to get some historical corroboration. Although I had never heard of all this, I learned that this assassination did indeed occur. But it was the Nazi retaliation for this murder that I found particularly striking.

Prussian-born Heydrich was a high-ranking SS official. He was prolific during the Second World War and his actions were thorough and particularly heinous. No less than Adolf Hitler referred to Heydrich as “the man with the iron heart”. The main architect of the Holocaust, Heydrich served as the president of what would become Interpol and chaired the conference “which formalised plans for the ‘Final Solution to the Jewish Question'”. Regarded as “the darkest figure within the Nazi regime”, Heydrich’s role was to neutralize resistance to the Nazi party throughout Europe. He was particularly effective to this end during his time as “Reich Protector” in Prague where his specialty was ethnic cleansing and his goal was to “Germanize the Czech vermin”. So confident was he of his suppression of the Czechs that he regularly drove around town in an open car.

The Czech government-in-exile in coordination with London and the Czech underground decided to kill Heydrich in an operation named “Anthropoid”. While driving in his open car and coming to a hairpin turn before a bridge – an area where caution and a reduction in speed was called for – a Resistance fighter emerged from cover and levelled a machine gun at Heydrich which promptly jammed. Then a mine was thrown into the Reich Protector’s car which exploded wounding both Heydrich and Czech Resistance fighter Jan Kubiš, who fled and survived several days before being killed in a firefight with Nazi pursuers. 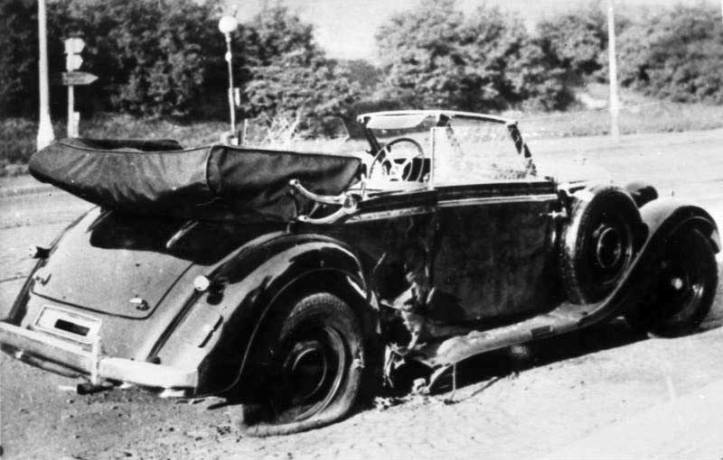 Though wounded by the mine, Heydrich attempted to pursue his would-be assassins on foot. He soon collapsed from his injuries and was taken to hospital. Heinrich Himmler visited him there and his recovery seemed to be underway despite severe damage to his diaphragm, spleen and left lung. Eventually, though, Heydrich succumbed and his death was attributed to sepsis; when the mine exploded in his car, the horse hair from the upholstery of the back seat and his own clothing had been driven into Heydrich’s body, causing the infection that claimed him.

The reprisal for this assassination has gone down in history as the Lidice Massacre.  The Nazis declared a “state of emergency” and imposed a curfew on the people of Prague. A notice went out that the perpetrators of this heinous crime would be hunted down and anyone found to be aiding and abetting them would be dealt with severely. The Nazis focused on Lidice because “its residents were suspected of harbouring local resistance partisans and were falsely associated with aiding Operation Anthropoid team members”. All of the men of the village were lined up against a barn and groups of five at a time were shot; shooting commenced at 7 am but was proceeding too slowly so the men were soon grouped by tens. “The dead were left lying where they fell”. Every male inhabitant of Lidice was killed that day, save two that were serving in the RAF and the deputy-mayor of the town who was in prison elsewhere. This man knew nothing of the massacre and, after serving his sentence, he returned to his hometown. When he discovered what had happened there he turned himself in to the Nazis – who laughed at him and sent him away. The deputy-mayor survived the war.

After the Nazis had murdered all the men of Lidice, 203 women and 105 children were rounded up. Children were separated from their mothers. Four women were pregnant; they were sent to a hospital for abortions and then interred in concentration camps. The rest of the women were sent to different camps and some of the children were sent to work in factories, being denied any hygiene or medical care. Seven children were deemed suitable for “Germanisation” and sent to live with SS families. The stories of the deputy-mayor and these seven children would certainly be remarkable. The remaining children were handed over to the Gestapo who sent them to Chelmno extermination camp where they were gassed to death in vans that served as mobile gas chambers.

The Nazis then turned on the village itself. All of the buildings in the town were burned to the ground or blown up with explosives. All of the animals in the town were slaughtered and the bodies in the cemetery were dug up and burned. All visible remains of the village were destroyed; the stream was re-routed as were the roads leading in or out. The whole area was covered with topsoil and crops were planted. A film of this operation was made by German intelligence.

Nazi propaganda bragged openly about the destruction of Lidice and the story was picked up by Allied media right away. Support for the slain villagers and an effort to rebuild the village was begun immediately when coal miners from Stoke-on-Trent began raising funds and started the Lidice Shall Live organization. In response to the tragedy, towns around the world were renamed incorporating the name “Lidice”; hospitals and monuments were also named in its honour.

The town of Lidice was rebuilt in a slightly different location shortly after the razing of the original village. In 2000, the poignant Memorial to the Children Victims of the War was erected at a site in the new village that overlooked the old. It sits in a meadow where many villagers had been killed. 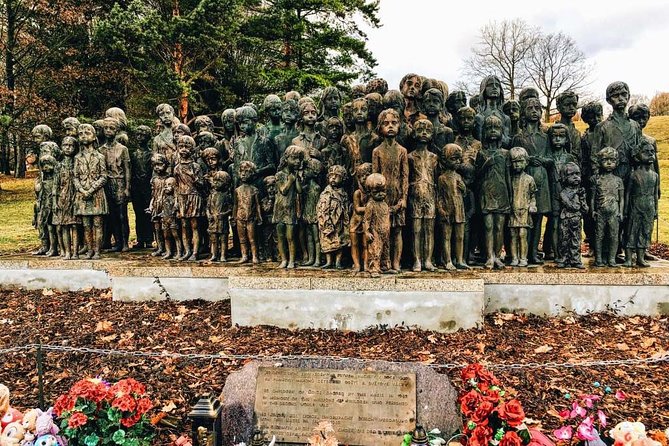 While this wasn’t one of my lighter excavations, it was an educational one and certainly the most compelling. One of the three greatest films ever made lead me to an interesting sequel novel which introduced a significant episode of the war to me. This lead to a tale of savage cruelty and the perpetuation of the memory of a people not forgotten.

Let’s get the weekend started. #friday #fridayvibes #fridaymood #isaachayes #soulmusic #funk #70s #vinyl #vinylcollection #vinylrecords #vinylcommunity #vinylcollector
My first favourite actor, the magnificent Mickey Rourke, was born September 16, 1952 in Schenectady. He turns 69 today. I loved him in Diner, Angel Heart and The Pope of Greenwich Village, seen here. #botd #otd #mickeyrourke #happybirthday #schenectady #newyork #actor #80s #legend #cool
Take a look at my latest book review that deals with the first biography of Steve McQueen to be released after his death. What I thought was a cheap, dime store paperback was actually the real deal. All the info you need is in this book. Read more at my site. Link in bio. @stevemcqueen #stevemcqueen #biography #reviews #review #bookstagram #book #bookrecommendations #bookshelf #booklover #books #bookcommunity #indiana
Fresh up on the website it's my review of the first novel by Quentin Tarantino, Once Upon a Time in Hollywood. With this book, you get much more than the film. And much less. It's a unique animal. And you need not be a fan of Tarantino's to get much out of his celebration of the Hollywood of the 1960's. Link in bio. #quentintarantino #onceuponatimeinhollywood #bookstagram #book #bookrecommendations #bookreview #booklover #60s #sixties
The third in an unexpected trilogy of articles concerning actor and singer Michael Parks is out now. In 1969, MGM made a pilot for a proposed series to star Parks called Then Came Bronson. It aired on TV domestically and in theatres in Europe. I’ve been surprised to learn how many people cherish the memory of the series. What really surprised me, though, was how deeply affected I was by the film that co-starred 21-year-old Bonnie Bedelia. This is a little more than a review, I guess. Take a look and see what I mean. Link in bio. @joshroush #michaelparks #bonniebedelia #thencamebronson #1969 #mgm #60s #motorcycle #harleydavidson #sixties #tvpilot #review #travel
Bonnie Bedelia and Michael Parks in Then Came Bronson, released in May of 1969 by MGM as a pilot for the television series. Watch this space… #comingsoon #staytuned #watchthisspace #thencamebronson #michaelparks #bonniebedelia #mgm #motorcycle #biker #classic #vintage #retro #harleydavidson