I wish I could recall the first time I saw Lost Horizon (1937). I seem to think that I stumbled on it one night on the “late show” in one of those wonderfully serendipitous occurrences that result in you discovering a gem quite unexpectedly.

This legendary tale began life as a novel from the pen of James Hilton. The English novelist had written many novels by 1933 when he published Lost Horizon, a story of a fictional utopian lamasery in the Himalayas. The story is the origin of the place name “Shangri-La”, a creation of Hilton’s that has gone on to be used to describe a perfect setting, a delightful place free from strife and turmoil. Hilton’s tale endeavours to promote the idea of harmony in the world through respect for others and the peaceful attainment of wisdom. In the story, a group of people are evacuating a country torn by civil war and their plane is diverted to the snowy Himalayas where they are received by a group that shepherds them into an idyllic valley of unparalleled beauty where the inhabitants practice a moderation that renders pain and suffering non-existent. The “hijacked” group then deals with the possibility of not getting back to “civilization” and begins to assimilate themselves into the local culture and soon are revelling in the escape they have unwittingly achieved. One of the group, though, is eager to return home but he has fallen in love with a youthful-looking local maiden who has lived in Shangri-La for some time. She decides to leave her home and travel with her new love to start a life with him. The impetuous couple is warned, though, that there will be disastrous results if this “young” girl leaves the Valley of the Blue Moon.

Lost Horizon initially received little attention until Hilton published Goodbye, Mr. Chips in 1934. His previous book was then issued in paperback as “Pocket Book 1”; Lost Horizon was the very first mass market paperback and it began to sell in huge numbers. Then, in 1937, Frank Capra took a script by Robert Riskin and made Lost Horizon into a film that starred Ronald Colman in the lead as Conway. His fellow travellers include Edward Everett Horton, Thomas Mitchell and Isabel Jewell. Once in the Valley of the Blue Moon, Conway encounters Sondra (Jane Wyatt) and Conway’s brother, George (John Howard), falls for Maria (Margo). Chang, their host, is played by H.B. Warner and Sam Jaffe portrays the High Lama.

This film version of Lost Horizon is astonishing. It was also a landmark production in Hollywood history starting with Harry Cohn of Columbia green-lighting a budget of $1.25 million, the highest ever to that point. For the part of the High Lama, Capra decided that stage actor A.E. Anson was perfect for the part. Anson, however, was so overwhelmed when Capra called to offer him the job that he promptly dropped dead. Capra ran into major budgetary concerns when shooting ran long at the Los Angeles Ice and Cold Storage Warehouse. Capra wanted actual cold conditions when shooting scenes set in the Himalayas but the cold damaged equipment. Capra used over a million feet of film and ran over budget; the film did not break even until it was reissued, five years after original release.

Frank’s first cut was six hours long and he eventually trimmed it to 3-and-a-half. Initial feedback was negative and Capra was distraught. The length of the film was still a major sticking point and Capra saw his version heavily edited, bringing it finally down to 132 minutes. Interestingly, the version now available on home video includes missing footage and at various points the audio track is heard and still pictures are shown, much the same as Judy Garland’s A Star is Born (1954). The film received mixed reviews but was nominated for seven Academy Awards including Best Picture. It won for its astonishing art direction and for the mammoth editing work that was done. Over 70 years later, Capra’s vision of Shangri-La is revered as the masterpiece it is.

Miraculously, years ago I stumbled on a 1946 album version of Lost Horizon issued by Decca Records. The story is told by Ronald Colman over the span of three 12″ shellac records played at 78 RPM. The music is by Victor Young with direction by George Wells and it is the one thing I own that I honestly think is rare. It staggers me, actually, that I own this, considering how much this story has meant to my family and I. Borderline priceless. 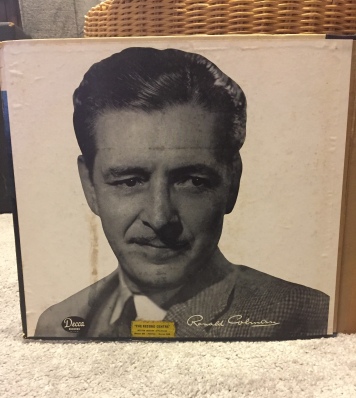 This wonderful story lay dormant until 1973 when Lost Horizon was remade as a musical film, renowned today as a colossal failure. Ross Hunter spent 20 years making films at Universal (Magnificent Obsession, All That Heaven Allows, Imitation of Life) and then left the studio in 1971. He moved to Columbia and set about remaking Lost Horizon. Hunter’s big plan was to finally make a film with his friend, composer Burt Bacharach. Burt would write the score for the film with his long-time lyricist Hal David. Hunter aimed to punch up the hopeful, spiritual aspects of the story and began assembling his team. Director Charles Jarrott and screenwriter Larry Kramer seem odd choices to me as neither has (or had) a major credit to their name.

The odd choices continued with the selection of English-Australian actor Peter Finch for the lead. An interesting aside about Finch involves his mother, Alicia. At the time of Finch’s birth, Alicia was married to research chemist George Finch. Alicia, though, had an affair with an Indian Army officer that resulted in the birth of Peter. George divorced Alicia when he found out about the affair and took Peter with him and Alicia eventually married her lover. Peter Finch only discovered the identity of his biological father when Peter was in his 40’s. Anyways, Peter had been an accomplished actor for years in British films when he got tapped to star in Lost Horizon. No singer, Finch’s vocals were dubbed in the picture. Finch recovered from the debacle of Lost Horizon with his work in Network (1976). While promoting Network, however, Finch died of a heart attack in the lobby of the Beverly Hills Hotel. He went on to win a posthumous Oscar for Network, becoming the first person to win a Best Actor Oscar after his death and he was also the first Australian to win the award. He was the only winner of a posthumous Oscar in an acting category until fellow Australian Heath Ledger won Best Supporting Actor in 2009. Finch is fine in Lost Horizon, workmanlike and nothing more.

Liv Ullman, the Norwegian born in Japan, seems like a female Peter Finch, really. They seem cut from the same professional, workmanlike, unremarkable cloth. Sally Kellerman is known to most as Major Houlihan in Robert Altman’s M*A*S*H (1970). Signed to Verve Records at age 18, Sally released an album in 1972 and subsequently does all her own singing in Lost Horizon. George Kennedy employs his usual bluster as an engineer on the run but doesn’t punch anyone out here. Michael York (Logan’s Run) and Olivia Hussey (Romeo & Juliet) are perfectly cast as the young lovers who plan to flee Shangri-La. York is earnest and does well and the same goes for Olivia who was married to Dean Paul Martin at the time. She is 22 here and luminous. Bobby Van was also perfectly cast. More than adequate as a song and dance man since the Fifties, Van never really rose through the Hollywood ranks – though he had much Broadway success – so to find him in a role like this in a movie like this at a time like this makes sense.

James Shigeta (Die Hard) gets a song and rightfully so; James was once known as “the Frank Sinatra of Japan”. Charles Boyer as the High Lama makes sense to me but the venerable John Gielgud is wasted here and apparently made no bones about his feelings about the ridiculous role he was given. Further down the list you’ll recognize Kent Smith and Tybee Brascia dances in the film; she was the wife of John Brascia who danced notably in White Christmas.

Lost Horizon is the epitome of the “box-office bomb”. It was “lambasted” by critics and lost $9 million. Unlike other bombs in history, this film’s rep has not improved over time. How bad is it? I dunno. I’m not a critic and I can “get something” out of almost any film. Turning a story into a musical? Heck, it’s worked like a charm before and there’s many examples we can point to. James A. Michener’s novel Tales of the South Pacific became the iconic South Pacific (1958) and the Oscar-winning The Philadelphia Story (1940) became the delightful High Society (1956). But where Rogers and Hammerstein and Cole Porter rolled out some of their best stuff for those films, it seems the prolific and successful team of Bacharach and David were at the nadir of their partnership in 1973.

Bacharach says that the songs themselves “worked” but suffered in how they were used in the film. He was vocal about this but went ignored. He felt that his lyricist Hal David was unsupportive and the two subsequently filed lawsuits against each other and dissolved their partnership. The album was released on Herb Alpert‘s A&M Records and boasted an impressive jacket design. The title track was recorded by Shawn Phillips, a folk/rocker from Texas who had a middling career, and reached #63 on the charts. The cornball “Living Together, Growing Together”, sung by Shigeta in the film, was released as a single by the whitest of all black groups, the 5th Dimension. It peaked at #32 and was the group’s last Top 40 hit; so far, Lost Horizon has killed Bacharach/David and the 5th Dimension’s chart run!

What makes a movie a turkey? I’ll admit, I don’t know. I’m fool enough to enjoy the movies that I enjoy and I often stay free from any disappointment that may come from viewing them critically, and that also goes for the times I’m watching a movie and I know it’s bad. My wife will often chuckle and shake her head at me while I am gleefully devouring whatever meal she puts in front of me even though I often have no idea what it is I’m eating. Brown meat? Same with movies, in a way. If I like it, I like it. Roger Ebert’s thoughts aside. The ’73 version is lame-o but it still contains Hilton’s amazing story and, really, train wreck films do have a fascination all their own.

In terms of sheer imagination and wonder, Lost Horizon has few peers. While my two sons were growing up, I would often scan my DVDs to see what film I could introduce them to next. When I came to Capra’s Lost Horizon, I thought that it might be too long and slow for them but I gambled, hoping the story would capture their imagination and I was right. Subsequently, my youngest son sits today in his university film courses having heard of this film when many of his instructors haven’t. While the movie has personal resonance for me, it should be viewed by anyone who fancies themselves a movie person. Frank Capra’s heroic feat of filmmaking is not only notable for his efforts but also for the results. The film is a marvel to behold and properly preserves the legacy of James Hilton’s magnificent story, a story of hope and the pursuit of peace for all humanity.