Day 5: Hollywood – Released from the Army in 1960, Elvis Presley found himself right back in uniform. King went straight to Hollywood to play Specialist Tulsa McLean in “G.I. Blues”. This film is actually a great example of what is good and what is bad about King Movies. “G.I. Blues” is probably his most comedic film that features one of his best comedic performances. Presley breezes through the film with confidence, sings some great songs, and looks fantastic. The cast is pretty good and King interacts with them well and delivers some funny lines with impeccable comedic timing. On the flip side, however, there are some key things wrong with the film that unfortunately became part of the ‘formula’. The bulk of the film takes place in Germany but of course Presley never shot any scenes there. He’s acting up against a screen for some scenes and for others a stand-in is used. The cast, as I said, is not bad but some of the actors are the goofy, lightweight type that we will see ad nauseam in the films to come. Along with the great songs are some lame ones and the soundtrack ‘features’ a lullaby sang to a baby. His next two films were serious dramas, both excellent: “Flaming Star” and “Wild in the Country”. They weren’t received well and performed relatively poorly at the box office so he found himself back in a playful romp, the greatest of all King Movies and my favourite film ever, “Blue Hawaii”. This film featured an exotic locale, pretty girls and 14, count ’em, 14 songs and became Presley’s most successful film. So, the die was cast. People didn’t want to see Serious Elvis. They wanted Fun Elvis. And that’s the paradox: you know “G.I. Blues” and “Blue Hawaii” became the blueprint for every derivative and lightweight film to follow and you wished he would make more serious films. But, man, Fun Elvis is so enjoyable!

The films of Elvis Presley deserve to be studied at length. Presley’s time in Hollywood needs it’s own book or website – I’ve been making notes to this end for years. There is a general and widespread misconception regarding them. Not about their quality, unfortunately, but about the level of enjoyment they – and many other ‘bad’ movies, for that matter – can provide. As I say, there is a paradox at work here: you find yourself frustrated with the lack of quality of most of the films while at the same time you are enjoying them immensely. Again, it’s so hard to accurately and thoroughly report on this area of Presley’s career in such a short space. I think it can be summed up thusly: the years Elvis spent in Hollywood are the years when Col. Tom Parker did the most damage to his client’s reputation. It’s also the time when Parker’s business practices reached the height of thievery and the pinnacle of abuse of power. In a nutshell, basically every deal Parker made in Hollywood for ‘his boy’ succeeded in benefiting himself more than Elvis and showed a blatant disregard for the effect that releasing a succession of family-friendly, light comedy films overloaded with poor songs would have on the reputation and legacy of his only client. Elvis’ acting ability was undervalued and commerce was not only valued by Parker over art but was held up as the only reason to be in Hollywood.

Now the good news. Elvis Presley’s 33 films are infinitely enjoyable. From a strictly critical standpoint, they are hard to defend. They are the very definition of ‘guilty pleasures’. Elvis Presley loved to go to movies as a young man and when the opportunity came to go to Hollywood to make his own films he jumped at the chance and had aspirations of following in James Dean’s footsteps. He wanted to make serious films with no singing. His first four films showed promise: these four showed him in his natural, untamed state, the songs he was made to sing were, for the most part, good – some even great – and he was surrounded by quality actors. Also, keep in mind that in one of them he shoots his brother and in two others he kills men; one he kills with a switchblade in an alley. They were gritty, vibrant and two of them were the best dramas he ever made. But the evil colonel’s plan went into effect when Elvis returned from the Army. And so began a cycle of film contracts that benefited Elvis, yes, but the Colonel even more, box office hits mostly bereft of any artistic quality and songs so asinine that, taken out of the context of the films they were used in, they are slight, ridiculous tripe. It’s even baffling to me that this is what qualified as an album release by the King of Rock ‘n’ Roll in the 1960’s. Soundtracks. Eight to twelve tracks from the movie with maybe a spare leftover song from the past to flesh it out. The Colonel’s theory was that the films would sell the records and the records would sell the films. For financial reasons, the Colonel had his own stable of songwriters and they filled the movies with songs about fat men overeating, songs about shrimp, about how hard it is to dance in a small vehicle and lullabies sung to babies and small children. They were plot devices not songs. The movies gradually began to feature poor casts and ridiculously claustrophobic studio and back-projection filming techniques. And yet…and yet. Much like Cary Grant and John Wayne, Elvis Presley exuded a natural charisma and a magnetic personality that allowed him to basically play himself in most of his films. And it’s this charm above all other things that makes them so enjoyable. As for the soundtracks, as ridiculous as some of the songs are, Presley’s voice, his style of singing and his way with a song makes a lot of them more-than-listenable. It also helps that there are some genuine gems to be found in these films. The movies are wonderful as ‘comfort viewing’. Often they feature great photography of some beautiful locales, great looking female co-stars, they feature scenarios and lifestyles that any young (or young at heart) person would love to find themselves in and they feature Elvis being Elvis.

By 1967, though, Presley had had enough. He wanted – needed – the exhilaration of live performance again. So, the wheels were set in motion to stop making movies and get back to making records and back to the concert stage. Author Alana Nash has written a mesmerizing book on Col. Tom Parker and his relationship with EP. In this book, she puts forth an astounding notion. Elvis didn’t write his own songs. As previously stated, Parker had a stable of songwriters who were not affiliated with Elvis because they were great songwriters but because they were willing to give up a large percentage of their portion of the profits gained from songwriting to Colonel Tom. These songwriters simply did not have what it took to write songs with a style or a quality to rival the output of Bob Dylan, the Beatles or the Rolling Stones. Therefore, Elvis spending the bulk of the 1960’s in the vacuum of Hollywood and the family-friendly musical comedy served to preserve his celebrity and keep him visible during this turbulent, political era. Talent and charisma aside, the notion is put forth by author Nash that Presley did not have the apparatus in place to stay relevant during the music scene of the ’60’s. The movies kept him alive in the industry until the time was ripe to bust out of the celluloid prison he was trapped in.

When he emerged, he embarked on a season of artistry that rivaled the significance of his first years. His timing was perfect. Yet again. 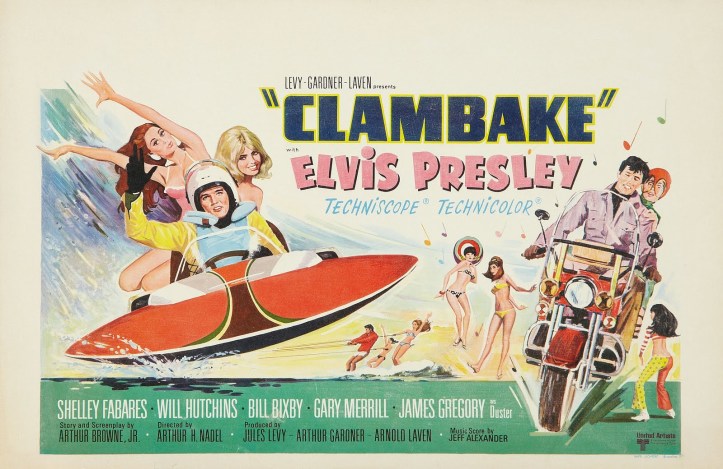